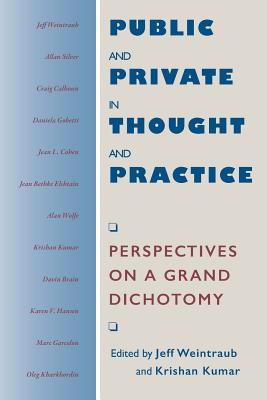 Public and Private in Thought and Practice

Perspectives on a Grand Dichotomy (Morality and Society Series)

These essays, by widely respected scholars in fields ranging from social and political theory to historical sociology and cultural studies, illuminate the significance of the public/private distinction for an increasingly wide range of debates. Commenting on controversies surrounding such issues as abortion rights, identity politics, and the requirements of democratization, many of these essays clarify crucial processes that have shaped the culture and institutions of modern societies.

In contexts ranging from friendship, the family, and personal life to nationalism, democratic citizenship, the role of women in social and political life, and the contrasts between western and (post-)Communist societies, this book brings out the ways the various uses of the public/private distinction are simultaneously distinct and interconnected. Public and Private in Thought and Practice will be of interest to students and scholars in disciplines including politics, law, philosophy, history, sociology, and women's studies.

Krishan Kumar is Professor of Social Thought at the University of Kent at Canterbury.

Stephen Bann is Professor of Modern Cultural Studies at the University of Kent at Canterbury.
Loading...
or support indie stores by buying on