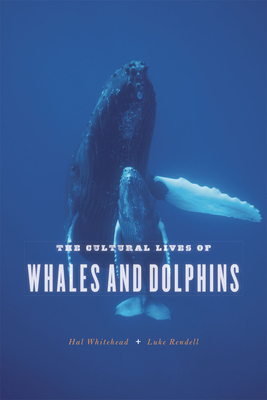 The Cultural Lives of Whales and Dolphins (Hardcover)

In the songs and bubble feeding of humpback whales; in young killer whales learning to knock a seal from an ice floe in the same way their mother does; and in the use of sea sponges by the dolphins of Shark Bay, Australia, to protect their beaks while foraging for fish, we find clear examples of the transmission of information among cetaceans. Just as human cultures pass on languages and turns of phrase, tastes in food (and in how it is acquired), and modes of dress, could whales and dolphins have developed a culture of their very own? Unequivocally: yes. In The Cultural Lives of Whales and Dolphins, cetacean biologists Hal Whitehead, who has spent much of his life on the ocean trying to understand whales, and Luke Rendell, whose research focuses on the evolution of social learning, open an astounding porthole onto the fascinating culture beneath the waves. As Whitehead and Rendell show, cetacean culture and its transmission are shaped by a blend of adaptations, innate sociality, and the unique environment in which whales and dolphins live: a watery world in which a hundred-and-fifty-ton blue whale can move with utter grace, and where the vertical expanse is as vital, and almost as vast, as the horizontal. Drawing on their own research as well as a scientific literature as immense as the sea--including evolutionary biology, animal behavior, ecology, anthropology, psychology, and neuroscience--Whitehead and Rendell dive into realms both humbling and enlightening as they seek to define what cetacean culture is, why it exists, and what it means for the future of whales and dolphins. And, ultimately, what it means for our future, as well.

Hal Whitehead is a University Research Professor in the Department of Biology at Dalhousie University in Halifax, Nova Scotia, and the author of Sperm Whales: Social Evolution in the Ocean and Analyzing Animal Societies, both published by the University of Chicago Press. Supported by the Marine Alliance for Science and Technology, Luke Rendell is a lecturer in biology at the Sea Mammal Research Unit and the Centre for Social Learning and Cognitive Evolution of the University of St Andrews, Scotland.
or
Not Currently Available for Direct Purchase
Copyright © 2020 American Booksellers Association