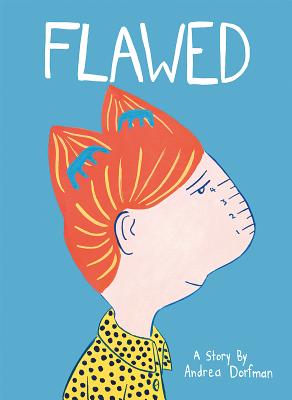 National Film Board of Canada Collection

From the Emmy-nominated, PBS-aired animated short.

Flawed is a true story of self-acceptance, adapted from the Emmy-nominated film of the same name.

In Flawed, author Andrea Dorfman tells the true story of how she falls head over heels for Dave, "the nicest guy in the world." But she is conflicted about her feelings for her new love. He's a plastic surgeon; she hates plastic surgery and its power to make people feel flawed.

Dorfman joins Dave in the operating room to watch him fix a man's badly injured hand. She sees for herself the difference between plastic reconstructive surgery and cosmetic surgery. Dave truly is an artist. She knows she's falling in love. But when Dave performs a cosmetic surgery on a healthy boy so he won't be teased at school, Dorfman questions everything she thinks she loves about him. Her discomfort with Dave's decision to operate on the boy sends her on a journey of self-reflection that forces her to confront her own fears about the way she looks. She feels flawed.

Dorfman's playful and colorful illustrations along with her deeply personal writing takes readers through the genesis of her self-image -- from the carefree days of her childhood to the gut-wrenching awkwardness of her adolescence, and beyond. When she realizes that her negative self-perception is stopping her from being happy, Dorfman makes the bold move to accept herself as she is -- imperfections and all. As Dorfman concludes, it's our flaws that make us extraordinary.

In the tradition of the NFB's creative and innovative storytelling on film comes the National Film Board of Canada Collection: a series of celebrated animated films, documentary films and media projects adapted for the printed page.

Whether discovering a much-loved classic for the first time or interacting with a favorite film in a new and exciting way, readers will be delighted with the thought-provoking stories and inventive presentations of the National Film Board of Canada Collection.

Andrea Dorfman is an award-winning animator and filmmaker. Flawed, adapted from the Emmy-nominated film of the same name, is Dorfman's first authored book. Her video poem collaboration with poet Tanya Davis, How to Be Alone, has garnered more than eight million views on Facebook and was published in 2013. Dorfman lives in Halifax, Nova Scotia (with Dave).
Loading...
or support indie stores by buying on