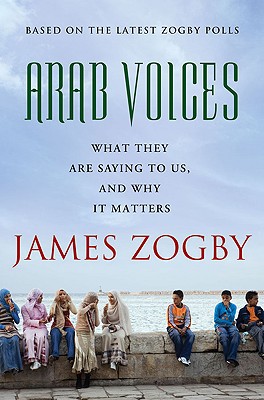 What They Are Saying to Us, and Why It Matters

The Arab World is a region that has been vastly misunderstood in the West. "Arab Voices" asks the questions, collects the answers, and shares the results that will help us see Arabs clearly. The book will bring into stark relief the myths, assumptions, and biases that hold us back from understanding this important people. Here, James Zogby debuts a brand new, comprehensive poll, bringing numbers to life so that we can base policy and perception on the real world, rather than on a conjured reality.

Based on a new poll run by Zogby International exclusively for this book, some of the surprising results revealed include:

* Despite the frustration with the peace process and the number of wars of the past few years, 74% of Arabs still support a two state solution to the Palestinian-Israeli conflict. And over one-third of Lebanese, Saudis, and Jordanians think that their governments should do more to advance peace.

* Despite wars in and around their region and the worldwide economic crisis, when asked "Are you better off than you were 4 years ago?" 42% of those polled say they are better off, 19% worse off.

* Arabs like American people (59% favorable rating), values (52%) and products (69%), giving them all high ratings. And Canada gets high favorability ratings everywhere (an overall rating of 55% favorable and 32% unfavorable).

* However, Arabs overwhelmingly rate American society "more violent and war-like" (77%) or "less respectful of the rights ofothers" (78%) than their own society. Why? Because of the Iraq war and continuing fallout from Abu Ghraib, Guantanamo, and the treatment of Arab and Muslim immigrants and visitors to the United States.

* What type of TV show do Saudis and Egyptians prefer to watch? The answer is, "Movies," which draws over 50% of the first and second choice votes. In Morocco, the top rated shows are "soap operas" and music and entertainment programs, drawing almost two-thirds of the first and second choice votes. Religious programs are near the bottom of the list of viewer preferences, garnering less than 10% of votes in all three countries.


Praise For Arab Voices: What They Are Saying to Us, and Why It Matters…

“Persuasively illustrates…that Americans tend to project their fears and desires onto Arabs and Muslims rather than searching for common ground…It’s hard to deny the validity of Zogby’s larger argument. To succeed in the Middle East, the United States needs to listen more to actual Arab voices, and not let preconceived myths about the Muslim world dictate policy.”—The New York Times Sunday Book Review

“An informative and readable book that avoids the reductionism, demonology, and victimology that all too often taint treatment of this subject.”—Foreign Affairs

"Jim Zogby has written an essential and enlightening book on Arab opinion. Arab Voices is a must read for anyone who wants to hear true voices from the Arab world."--Her Majesty Queen Noor of Jordan

"Arab Voices is a breakthrough book. Finally, after decades of relentlessly ignorant or bigoted stereotyping of the so-called ‘Arab Mind’—often a form of anti-Semitism against Arabs—by partisans having other agendas, James Zogby responds. He presents the results of intensive polling, within historical, political and cultural contexts, in an engrossing search for accuracy, fairness and truth. Let’s see if the slanted press and the wrathful cable-talk radio hosts can tolerate giving this book and its calm author a chance to correct the record."--Ralph Nader

“Arab Voices distills Jim Zogby’s lifetime of immersion in a central issue of our times—how can America and the Arab world can find the right path forward? Well-written, provocative, and peppered with vivid anecdotes and surprising data, this is essential reading for anyone seeking to penetrate the myths surrounding the Middle East.”--Richard North Patterson

"The need for United States engagement in the Middle East has never been greater, and I believe it is essential that Americans better understand the people and cultures in the region.  This book improves our understanding of these diverse communities and provides valuable insight into the lives of Arab Americans."--President Jimmy Carter

"This pioneering effort is readable and useful for both policy makers and general readers...Essential."--Choice

"Jim Zogby has written a timely and valuable book on the pressing need for effective public diplomacy toward the broader Middle East. The best definition of public diplomacy is to first listen, understand, and then inform, engage and influence.'Zogby explains how this can be done."--Ambassador Edward P. Djerejian, former Assistant Secretary of State for Near Eastern and South Asian Affairs and founding director, James A. Baker III Institute for Public Policy at Rice University “We don’t understand Arabs; they don’t understand us. Jim Zogby, at last, helps bridge that gap. Every American policy maker should read this book – and listen to him.”—Bill Press, nationally-syndicated talk show host   "Europeans should read this book. Arab attitudes to Europe track their attitudes to America  much more than Europeans might like to think.  Both are seen through the same prism  of Palestinian dispossession. That dispossession is  an Arab wound rather than a Muslim one. The security of Europe,even more than that of  America, requires us to find a resolution to the  differences so lucidly described in this  book."--John Bruton, former Prime Minister of Ireland and EU Ambassador to the United States

"Thanks to his experience in the region, Jim Zogby is uniquely positioned to present rarely heard voices from the Arab world.  Here, he does just that, shining a bright light on a deeply misunderstood part of the world."--Arianna Huffington

"For four decades, we have fought wars in the Middle East, spent billions, lost many American lives. This book shows that the Arabs are paying rapt attention to us and shifting their opinion accordingly. For those who care about US policy, it’s the best information you can have.  Columnists speak of the “Arab street” as if Mideast opinion were carved in stone.  In this important new book, James Zogby shows us its vibrancy."--Chris Matthews

James Zogby is founder and president of the Washington, D.C. based Arab American Institute and a senior advisor to the polling firm Zogby International. He writes a weekly column that appears in twenty Arab newspapers and hosts a weekly call-in discussion program on Abu Dhabi television. A member of the Council on Foreign Relations, Democratic National Committee, and co-chair of the DNC's Resolutions Committee, he and his wife Eileen live in Washington, D.C."
Loading...
or
Not Currently Available for Direct Purchase