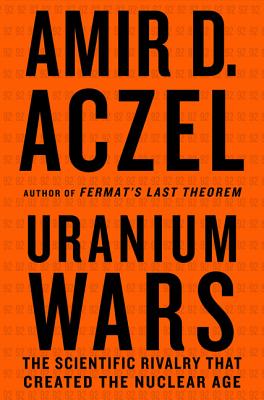 The Scientific Rivalry that Created the Nuclear Age (MacSci)

Uranium, a nondescript element when found in nature, in the past century has become more sought after than gold. Its nucleus is so heavy that it is highly unstable and radioactive. If broken apart, it unleashes the tremendous power within the atom—the most controversial type of energy ever discovered.
Set against the darkening shadow of World War II, Amir D. Aczel's suspenseful account tells the story of the fierce competition among the day's top scientists to harness nuclear power. The intensely driven Marie Curie identified radioactivity. The University of Berlin team of Otto Hahn and Lise Meitner--he an upright, politically conservative German chemist and she a soft-spoken Austrian Jewish theoretical physicist--achieved the most spectacular discoveries in fission. Curie's daughter, Irène Joliot-Curie, raced against Meitner and Hahn to break the secret of the splitting of the atom. As the war raged, Niels Bohr, a founder of modern physics, had a dramatic meeting with Werner Heisenberg, the German physicist in charge of the Nazi project to beat the Allies to the bomb. And finally, in 1942, Enrico Fermi, a prodigy from Rome who had fled the war to the United States, unleashed the first nuclear chain reaction in a racquetball court at the University of Chicago.
At a time when the world is again confronted with the perils of nuclear armament, Amir D. Aczel's absorbing story of a rivalry that changed the course of history is as thrilling and suspenseful as it is scientifically revelatory and newsworthy.


Praise For Uranium Wars: The Scientific Rivalry that Created the Nuclear Age (MacSci)…

“Combining these themes in a single, brief narrative is a difficult trick but one Aczel pulls off well. . .[he] writes with colour, lucidity and conviction.” —The Financial Times

“The book covers several new developments of interest to atomic aficionados...Mr Aczel's research is thorough and his conclusions interesting.” —The Economist

“The combination of clear, in-depth scientific explanation and outstanding research make this book, from the author of Fermat's Last Theorem, the one you should grab.” —Discover

“Aczel ponders the moral conduct of the scientists involved…he has developed rich anecdotes about their personalities and discoveries.” —The Globe and Mail

“A readable account of how nuclear bombs came to be made, deployed and developed…Aczel brings the story up to date.” —The Times

“A fascinating examination of the events, the personalities, and the science that have led to the atomic bomb. A very timely book at an era in which nuclear proliferation has become a real danger.” —Mario Livio, best-selling author of Is God A Mathematician?

“Reinforced by Aczel's intent review of the historical controversy surrounding the 1941 meeting between physicists Niels Bohr and Werner Heisenberg, and of the decision (which Aczel criticizes) to use the new doomsday weapon on Japan, this synthesis of early atomic history strengthens Aczel's reputation for writing accessible, well received popular works on physics and mathematics.” —Booklist

“A concise and cogent review of one of the most exhilarating, yet fearsome, eras in the history of scientific discovery. Aczel sharply profiles the brilliant--and often conflicted--men and women who led us into the nuclear age.” —Marcia Bartusiak, author of Einstein's Unfinished Symphony

“Amir Aczel skillfully and lucidly traces the twists and turns of uranium: a once obscure metal that became, through chance discoveries and a string of intricate decisions, the chief character of one of the central political, military, and scientific developments of the twentieth century. Rarely has the story of nuclear fission been told in so clear and riveting a fashion.” —Michael D. Gordin author of Five Days in August: How World War II Became a Nuclear War

“Uranium Wars is a fascinating story of discovery, intrigue, clash of egos, spying, and international conflict. Aczel tells this amazing story in a racy and accessible style - with authority but lightness-of-touch to hold the reader spell-bound.” —David Clark, author of Newton's Tyranny

Amir D. Aczel is the bestselling author of Fermat’s Last Theorem, The Riddle of the Compass, and The Mystery of the Aleph, and a fellow of the John Simon Guggenheim Memorial Foundation.
Loading...
or support indie stores by buying on