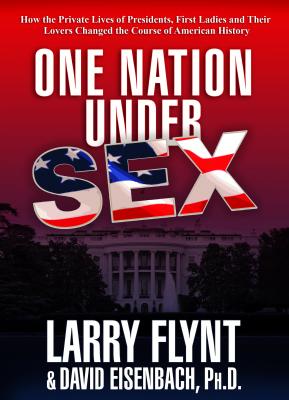 One Nation Under Sex

How the Private Lives of Presidents, First Ladies and Their Lovers Changed the Course of American History

Ben Franklin saved the American Revolution by seducing French Women. A gay love affair between President James Buchanan and Senator William King aided the secession movement. Woodrow Wilson's girlfriend dictated his letters to the German Kaiser. And lesbian relationships inspired Eleanor Roosevelt to become a revolutionary crusader for equal rights. The colorful sex lives of America's most powerful leaders have influenced social movements, government policies, elections and even wars, yet they are so whitewashed by historians that people think Thomas Jefferson and Abe Lincoln were made of marble, not flesh and blood.

But the truth is about to come out. In "One Nation Under Sex," free speech activist and notorious Hustler magazine publisher Larry Flynt teams up with Columbia University history professor David Eisenbach to peek behind the White House bedroom curtains and document how hidden passions have shaped public life. They unpack salacious rumors and outright scandals, showing how private affairs have driven pivotal decisions often with horrific consequences. Along the way, they explore the origins of America's fascination with sex scandals and explain how we can put aside out political moralism and begin focusing on the real problems that threaten our nation.


Praise For One Nation Under Sex: How the Private Lives of Presidents, First Ladies and Their Lovers Changed the Course of American History…

“Those looking for salacious details will find them, but Flynt and Eisenbach favor analysis over sensationalism, providing a new perspective of the men and women who have shaped our nation.”--Publishers Weekly

“Dig into the unwholesome side of American history to uncover how the sexual peccadilloes of the men we elect have transformed the world for good and ill...Sometimes it takes an asshole like Flynt to tell stories that need to be told.”—The Stranger

“Only liars will pretend that this book isn’t absolutely fascinating.”--Buffalo News "Presidential hanky-panky is as old as the nation itself. But no one can bring it to life quite like Larry Flynt."--Steven E. Levingston, Washington Post "It is amazing that this inherently salacious subject could be treated in such a thoughtful and  documented fashion, scholarly even, and yet be such a great read."--Robert Scheer, author of The Great American Stickup

“Americans often like to think that extramarital sex – or even a strong libido – is somehow a sign of poor character in our presidents. One Nation Under Sex explodes that myth. From Benjamin Franklin and Thomas Jefferson onward, our most respected leaders have always engaged in bedroom behavior that would outrage the cultural commissars—at no harm to the republic. You don’t have to agree with all of Larry Flynt’s and David Eisenbach’s readings of history to enjoy this sex-filled tour through more than 200 years of scandal.”--David Greenberg, presidential historian, Rutgers University, and author of Nixon’s Shadow

“Larry Flynt has waged a lifelong battle against hypocrisy and prudery: shattering every propriety and slaughtering every sacred cow. The political classes have never been safe from his special brand of satire. Now he turns his rabble-rousing sensibility backwards with a similar imperative. No more whitewashing! Smash decorum! Bring down the elites!”—Laura Kipnis, How To Become a Scandal and of Against Love

"As a Washington, DC, investigative reporter for two decades, I was certain the secret personal lives of politicians had an unappreciated affect on public policy and, eventually, history.  Here's the book that documents it."--Rudy Maxa, former Washington Post reporter and columnist

“Teaming up Larry Flynt with Columbia University historian David Eisenbach seems like an odd match but Flynt and Eisenbach have combined their talents and perspectives to produce a unique book that transgresses the holy empire of American history by providing a serious investigation of the sex lives of the Presidents. Be warned: this is not smut; this is an important and thorough historical excavation of how sex built the White House and our nation.”--Jim Downs, Professor of History, Connecticut College

Larry Flynt is the legendary publisher of Hustler magazine and has been a famous crusader for First Amendment and privacy rights for over three decades. His landmark Supreme Court case, Hustler Magazine v. Falwell, is taught in law schools throughout the United States. A former political candidate, Flynt remains active in his longstanding campaign to expose sexual hypocrisy in politics and transform the national political dialogue. He lives in Los Angeles, California.David Eisenbach, Ph.D., is an award-winning historian who teaches American political history at Columbia University. He was the creator and host of the two-hour History Channel special, The Beltway Unbuckled, about how presidential sex shaped American history. He lives in New York City.
Loading...
or
Not Currently Available for Direct Purchase