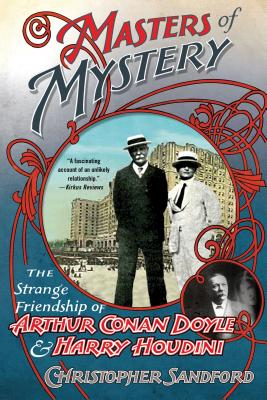 The Strange Friendship of Arthur Conan Doyle and Harry Houdini

Renowned mystery author Arthur Conan Doyle and famous illusionist Harry Houdini first met in 1920, during the magician's tour of England. At the time, Conan Doyle had given up his lucrative writing career, killing off Sherlock Holmes in the process, in order to concentrate on his increasingly manic interest in Spiritualism. Houdini, who regularly conducted séances in an attempt to reach his late mother, was also infatuated with the idea of what he called a "living afterlife," though his enthusiasm came to be tempered by his ability to expose fraudulent mediums, many of whom employed crude variations of his own well-known illusions. Using previously unpublished material on the murky relationship between Houdini and Conan Doyle, this sometimes macabre, sometimes comic tale tells the fascinating story of the relationship between two of the most loved figures of the twentieth century and their pursuit of magic and lost loved ones.

Christopher Sandford has published acclaimed biographies of Kurt Cobain, Mick Jagger, Paul McCartney, Imran Khan, Harold Macmillan, John F. Kennedy, Steve McQueen, and Roman Polanski. He is also the author of Masters of Mystery: The Strange Friendship of Arthur Conan Doyle and Harry Houdini. He has worked as a film and music writer and reviewer for over 20 years, and frequently contributes to newspapers and magazines on both sides of the Atlantic. Rolling Stone has called him "the pre-eminent author in his field today." Sandford divides his time between Seattle and London.

Praise For Masters of Mystery: The Strange Friendship of Arthur Conan Doyle and Harry Houdini…

“Absorbing and prodigiously researched . . . Houdini's and Conan Doyle's life stories, together and separately, have been told before, but Masters of Mystery is a worthy addition to the long shelf of existing work about these remarkable men.” —Seattle Times

“Rivetingly chronicles the eternal persistence of humbug, chicanery and that inextinguishable human trait we call 'hope.'” —Arthur Magida, author of The Nazi Séance

“A must read… a fascinating insight into Houdini's daily life and his unique relationship with Sir Arthur Conan Doyle… provided a great amount of new relevant historical facts and details that have been heretofore hidden from Houdini followers… Sandford's reverse engineering of Houdini's thought process makes the reader feel they are in the company of the Houdini and his contemporaries… I couldn't put the book down.” —Geno Munari, President, Houdini Picture Corporation, Houdini, Houdini Magic.