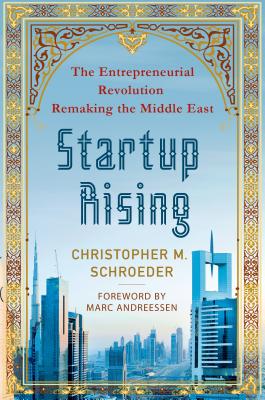 Despite the world's elation at the Arab Spring, shockingly little has changed politically in the Middle East; even frontliners Egypt and Tunisia continue to suffer repression, fixed elections, and bombings, while Syria descends into civil war. But in the midst of it all, a quieter revolution has begun to emerge, one that might ultimately do more to change the face of the region: entrepreneurship. As a seasoned angel investor in emerging markets, Christopher M. Schroeder was curious but skeptical about the future of investing in the Arab world. Travelling to Dubai, Cairo, Amman, Beirut, Istanbul, and even Damascus, he saw thousands of talented, successful, and intrepid entrepreneurs, all willing to face cultural, legal, and societal impediments inherent to their worlds. Equally important, he saw major private equity firms, venture capitalists, and tech companies like Google, Intel, Cisco, Yahoo, LinkedIn, and PayPal making significant bets, despite the uncertainty in the region. With Startup Rising, he marries his own observations with the predictions of these tech giants to offer a surprising and timely look at the second stealth revolution in the Middle East-one that promises to reinvent it as a center of innovation and progress.

“[Schroeder] paints a remarkable picture of the entrepreneurial shift going on in Dubai, Egypt, Jordan, Lebanon, Saudi Arabia, and other regions...illuminating.” —Publishers Weekly

“The narrative really comes alive when the author chronicles the activities of the tech-savvy young Eygptians, Jordanians and Lebanese who are beginning to create new kinds of hope for their countries... his accounts of Jordan, where youth programs are providing opportunities to explore notions of self-determination while learning about entrepreneurship, are particularly fascinating. A lively introduction to a new generation's efforts to shape a future free of outdated notions of entitlement.” —Kirkus

“Provides a refreshing break from the hackneyed analyses of the region that reduce its people to cultural cliches while ignoring the other things that motivate young Arabs (like people everywhere...)” —Financial Times

“What Schroeder found will startle even the most jaded observer.” —The Washington Post

“Entrepreneurship isn't about just starting a business--it's a way of looking at the world. In this terrific book, Schroeder profiles dozens of innovators in the Middle East who are world class exemplars of this way of thinking. They're taking control of their lives, starting amazing businesses, and changing the world. There's no better guide to the Middle East's own Silicon Valley than Christopher M. Schroeder. Highly recommended.” —Reid Hoffman, co-founder/chairman of LinkedIn and co-author of the #1 NYT bestseller The Start-up of You

“Here's a book that makes you think beyond the gloomy headlines about the Middle East--and see how smart men and women are building the foundations of a prosperous future. In Startup Rising, Christopher M. Schroeder takes readers on a guided tour of the entrepreneurial movement that has gone almost unnoticed as the Arab Spring shatters the old political order. By the end of the book you'll be rooting for these young business leaders and gutsy innovators to build the Arab 21st century.” —David Ignatius, columnist, The Washington Post

“Christopher M. Schroeder has a message we should all hear loud and clear: To hell with pessimism about the Middle East. In Startup Rising, Chris's more than one dozen trips across the Arab world are woven together into a deeply personal and detail filled narrative of how technology can transform social and political orders from the ground up. He convincingly shows Arabs rich and poor seizing the moment, and converting centuries of entrepreneurial spirit into disruptive and positive energy. The startups rising in the wake of the Arab Spring will ensure that the region isn't left behind.” —Parag Khanna, international bestselling author of The Second World, How to Run the World, and Hybrid Reality

“In this rich and incisive book Christopher Schroeder tells a fascinating tale about another Middle East, where new ideas, bustling startups, and promising ventures, as opposed to politics and violence, are shaping the future. A rare and eye-opening first hand account that provides a powerful explanation for why the Arab Spring happened, and why its future may yet be brighter than headline news suggest. This book is a must read for anyone interested in the Middle East or how entrepreneurship and technology startups take flight.” —Vali Nasr, author of Forces of Fortune and The Dispensable Nation

“Startup Rising is one of the first to cover this very important topic: The young entrepreneurs who are the major driving force in the future growth and development of the Arab World.” —Wael Ghonim, Founder and Chairman, Nabadat Foundation, and author of Revolution 2.0

“Startup Rising is contrarian, as are many great entrepreneurs: His stories of people, innovation, and ideas in the Middle East are cautiously hopeful--a contrast to the grim news stories. Full of policy and investment insight, this is a bottom-up look at the new generation of tech entrepreneurs of the Middle East that are fast becoming their countries' greatest resource.” —Robert B. Zoellick, Former President of the World Bank Group, US Trade Representative, and Deputy Secretary of State

“This is one of the rare books that will change how you see the world. Christopher M. Schroeder brings to life the emerging Middle East entrepreneurial ecosystems, providing a powerful understanding of entrepreneurship anywhere in the world and specifically of the Middle East's emerging generation of questioning risk-takers.” —Marvin Ammori, Bernard L. Schwartz Fellow, The New America Foundation

“Startup Rising shatters our stereotypes of the Middle East. You can just feel the dynamism bubbling up from below and sense the immense possibilities for the future. Schroeder's ability to tell this fascinating story of the breadth and depth of entrepreneurship in the region is stunning.” —James Goldgeier, Dean, School of International Service, American University

“Startup Rising powerfully articulates what we instinctively know to be true--each country, region, and society has the will and talent to determine its own future. Schroeder illuminates a Middle East poised for entrepreneurial growth, fueled by innovation, and ready to turn opportunity into impact and collective progress for both women and men.” —Alyse Nelson, President & CEO, Vital Voices Global Partnership

“Christopher M. Schroeder identifies the trends reshaping the Middle East from the bottom-up. He talks to the entrepreneurs at the cutting edge to reveal the revolution the media has missed--whether in mobile technologies, consumer products, or, yes, women eager to make their mark. This book is essential for anyone looking to understand--or invest in--the new Middle East.” —Karen Kornbluh, former US Ambassador to the Organization for Economic Cooperation and Development

“Interest in entrepreneurship in the Middle East has never been greater, which reflects the critical role that new ventures can play in catalyzing economic change in the region. This book provides a lively look at the individuals and institutions behind these exciting and important developments.” —Josh Lerner, Harvard Business School and author of The Architecture of Innovation

“Christopher M. Schroeder has done a service to the Middle East by highlighting the extraordinary energy and potential of entrepreneurs in the region. This area will be a hotbed of new ideas over the next 20 years creating hundreds of thousands of jobs.” —Kevin Ryan, chairman and founder, Gilt

“This powerful and essential book will open your eyes to a new world of opportunity for people in the Middle East and emerging markets all over the world. Through vivid introductions to young entrepreneurs in the region and a compelling analysis of macro technology and economic trends, Startup Rising brilliantly demonstrates that peace and prosperity is attainable for the region.” —Julius Genachowski, Chairman of United States Federal Communications Commission, 2009-2013

“Important reading for anyone wishing to understand the promise and challenges of technology and entrepreneurial activity in the Middle East. Christopher Schroeder's gifted storytelling brings us close to talented entrepreneurs who are breaking through, providing a fresh narrative for the region and promise for a better world.” —Premal Shah, Co-Founder & President, Kiva

“A quick, fun read… he reveals the opinions of several Arab entrepreneurs and investors who he's already introduced in contrast with the subtle biases of colleagues in the U.S., Schroeder deftly – but unapologetically – invites a cross-cultural dialogue.” —Wamda

Christopher Schroeder is an entrepreneur and angel investor. He is the author of Startup Rising. In 2010, he wrote an op-ed for The Washington Post about the start-ups in Dubai, and was subsequently invited by Secretary of State Hillary Clinton to judge a start-up competition in Cairo one week before Tahrir Square. He is on the boards of advisors of the American University of Cairo School of Business and regional start-up resources Wamda and Oasis500. He lives in Washington, DC.
Loading...
or support indie stores by buying on