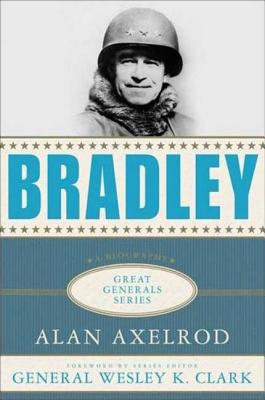 Dubbed by the World War II press as "The GI General" because of his close identification with his men, Omar Bradley rose to command the U. S. 12th Army Group in the European Campaign. By the spring of 1945, this group contained 1,300,000 men--the largest exclusively American field command in U.S. history. Mild mannered, General Bradley was a dedicated mentor, the creator of the Officer Candidate School system, and a methodical tactician who served through World War II. Then, as a five-star general, he lifted the Veterans Administration from corruption and inefficiency to a model government agency, served as U.S. Army chief of staff, first chief of the Joint Chiefs of Staff, and head of NATO. Alan Axelrod applies his signature insight and compelling prose to the life, strategy and legacy of the general who remains the model for all commanders today as the man who revolutionized the National Guard, shaped the US army's focus on the individual soldier, and emphasized cooperation and coordination among the military services--a cornerstone of modern U.S. military doctrine.


Praise For Bradley: A Biography…

"The author of George S. Patton's biography in the Great Generals series now gives us the life of that most flamboyant officer's polar opposite...Axelrod's fine, brief treatment begins with distinction the refurbishing of his reputation." -- Booklist, starred review

"Bradley, the latest offering from the "Great Generals" series edited by Gen. Wesley K. Clark, highlights the General's rise through the ranks to his eventual command of the 1.3 million troops in the 12th Army Group in Europe, the largest group of soldiers ever to serve under an American field commander. Alan Axelrod...takes useful time to characterize the interactions between Bradley and his counterparts...Axelrod explains how diverse influences made Bradley the efficient, straight-forward field general soldiers liked serving under." -- WWII Magazine

“Omar Bradley is far more than the “GI General,” he was America’s General, embodying those characteristics at the heart of the American-style of military leadership: selflessness, humility, adaptability, and above all, core values of integrity and respect that reflected the democracy he served.  Axelrod’s narrative highlights superbly how Bradley internalized these leadership principles and then infused them into our Army’s culture in a legacy that persists to this day.  Bradley tells the story of a military hero in the Army of a democracy–but the leadership lessons are universal, and they are timeless.”--Lieutenant General (Ret.) Daniel Christman, former Superintendent of the U.S. Military Academy at West Point

"There could hardly be a better guide to the life and career of Omar Bradley, the least heralded and last of the Army's five-stars, than Alan Axelrod. Axelrod has all the knowledge and skill needed to fully assess Bradley's military contributions, as well as his relationships with Eisenhower and Patton, and deliver it in a concise, compelling biography sure to win a permanent spot on your bookshelves." -- Theodore Kinni, author of No Substitute for Victory: Lessons in Strategy and Leadership from General Douglas MacArthur

Praise for Alan Axelrod:"An engaging minibiography...Patton's race across France has become legendary, but Mr. Axelrod reminds readers that it was the result of careful planning."--The Washington Times"Concise, incisive, and authoritative, Axelrod's Patton is a clear and entertaining biography...Axelrod has cut through the politics and chaff to get to the man."--Robert K. Wilcox, bestselling author of First Blue
"Like Patton at his best: polished, precise and persuasive." --Kirkus Reviews

Alan Axelrod is the author of the BusinessWeek bestseller Patton on Leadership, the Great Generals series book Patton, and many books on American and military history. He lives in Atlanta, Georgia.
Loading...
or
Not Currently Available for Direct Purchase