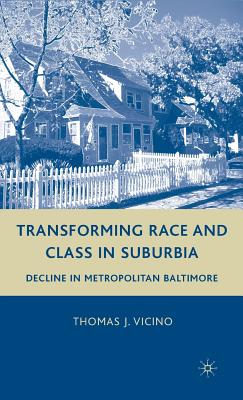 Transforming Race and Class in Suburbia

Just as the nation witnessed the widespread decay of urban centers, there is a mounting suburban crisis in first-tier suburbs - the early suburbs to develop in metropolitan America. These places, once the bastion of a large middle class, have matured and experienced three decades of social and economic decline. In the first comprehensive analysis of suburban decline for an entire region, Vicino uses Baltimore as an illustrative case to chronicle how first-tier suburbs experienced widespread decline while outer suburbs flourished since the 1970s. At the brink of the twenty-first century, Vicino illustrates how the processes of deindustrialization, racial diversity, and class segregation have shaped the evolution of suburban decline.

Praise For Transforming Race and Class in Suburbia: Decline in Metropolitan Baltimore…

"This is the most sophisticated study yet of first-tier suburban decline. Scholars and policymakers have only begun to catch up to the fact that the urban crisis has moved to the suburbs. Vicino gets it. His book will be indispensable for anyone who wants to understand the rapidly changing suburban landscape. Vicino shatters the conventional image of suburbia: Leave It to Beaver gives way to the New Suburban Gothic. Vicino displays the complex geography of first-tier suburbs pockmarked by bleak landscapes left behind by suburban sprawl. Transforming Race and Class in Suburbia is essential reading for anyone interested in suburban decline."--Todd Swanstrom, Professor of Public Policy Studies, St. Louis University and co-author of Place Matters: Metropolitics for the 21st Century

"Vicino masterfully provides a comprehensive analysis of the decline of the first-tier suburbs of Baltimore County, Maryland over the past several decades and describes the efforts of that County and the State to counter this trend, providing important lessons for other metropolitan areas with similar patterns of decline in their older suburbs."--Dennis Keating, Levin College Distinguished Professor, Cleveland State University and author of The Suburban Racial Dilemma "A comprehensive analysis of the evolution of first-tier suburbs and revitalization efforst in Baltimore County. This book should serve as a reliable and informative resource for urban scholars, planners, and policymakers, as it elucidates the reality of first-tier suburban communities and the challenges and opportunities they face in the 21st century."--Sugie Lee, Journal of the American Planning Association "Vicino's multidisciplinary approach, accurately and with detail, paints a human portrait applicable across the United States...This is an excellent addition to the literature and makes for a top-notch addition as a text in the areas or urban development, geography, planning, and public administration."--Selima Sultana, Urban Geography "Transforming Race and Class in Suburbia fills an important gap...It lays groundwork for years and decades of suburban research on this aspect as well as others, be it on the East Coast, somewhere else in the United States, or in suburban communities in developed countries in Europe or Australasia."--Katrin B. Anacker, International Journal of Urban and Regional Research

Thomas J. Vicino is Assistant Professor of Political Science at Northeastern University in Boston, where he is also affiliated with the Kitty and Michael Dukakis Center for Urban and Regional Policy and the School of Public Policy and Urban Affairs. Vicino specializes in the political economy of cities and suburbs, focusing on issues of economic development, housing, and demographics. His recent work appears in peer-reviewed journals such as Urban Studies, Urban Geography, and The International Journal of Urban and Regional Research. He serves on the Executive Council of the Urban Politics Section of the American Political Science Association, and he is an active member of the Urban Affairs Association and Association of Collegiate Schools of Planning. He holds a Ph.D. and M.P.P. from the University of Maryland Graduate School, Baltimore.
Loading...
or support indie stores by buying on