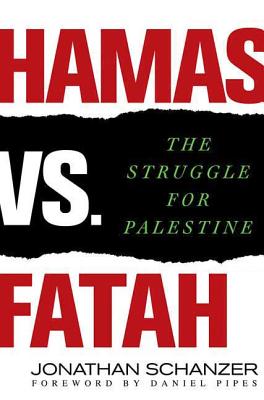 The Struggle For Palestine

In June 2007 civil war broke out in the Gaza Strip between two rival Palestinian factions, Hamas and Fatah. Western peace efforts in the region always focused on reconciling two opposing fronts: Israel and Palestine. Now, this careful exploration of Middle East history over the last two decades reveals that the Palestinians have long been a house divided. What began as a political rivalry between Fatah's Yasir Arafat and Hamas leader Sheikh Ahmed Yassin during the first intifada of 1987 evolved into a full-blown battle on the streets of Gaza between the forces of Arafat's successor, Mahmoud Abbas, and Ismael Haniyeh, one of Yassin's early protégés. Today, the battle continues between these two diametrically opposing forces over the role of Palestinian nationalism and Islamism in the West Bank and Gaza.

In this thought-provoking book, Jonathan Schanzer questions the notion of Palestinian political unity, explaining how internal rivalries and violence have ultimately stymied American efforts to promote Middle East peace, and even the Palestinian quest for a homeland.


Praise For Hamas vs. Fatah: The Struggle For Palestine…

“Jonathan Schanzer has performed a very useful task in explaining [the] rifts in the uniform Palestinian identity. It stands to help us, as Americans, have a firmer understanding of the reality of the situation...” —Washington Times

“To understand that these two drastically different Palestinian territories have little prospect of uniting in the future, there is no better book than that of Jonathan Schanzer, a recognized specialist on Islamic terrorism and Hamas.” —Libertad (Spain)

“[One] of the most important books published about the Hamas terrorist organization...” —David Frum, National Post (Canada)

“Hamas vs. Fatah... seems tailor-made to address the big questions behind the headlines from Gaza.” —Mark Hemingway, National Review

“It's hard to think of a more important book at this very moment.” —Dennis Prager

“This well-argued account helps sort out the two groups' tangeld history of nationalism and terrorism, the latter of which Hamas refuses to give up.” —Kirkus Reviews

“Schanzer investigates the conflict between rival Palestinian factions with nuance and detail as he exposes the long-broiling tensions and violent eruptions between Fatah and Hamas… Neophytes to the tangled world of Palestine's internal conflict will be treated to a serious, no-frills account; those readers more familiar with the issues will enjoy how Schanzer weaves a web of connectivity between the Palestinian conflict with Israel, the conflicts involving Lebanon, the rise of al-Qaeda and American complicity.” —Publishers Weekly

“Invaluable. Jonathan Schanzer's book is dispassionate and rigorous, and offers a devastating portrait of a self-destructive political spiral.” —John Podhoretz

“Schanzer's incisive scholarship unfolds the story of contemporary Palestinian political fragmentation, between Hamas and Fatah, between Yassin and Arafat, and their successors. Can this house divided stand? Schanzer is to be commended for sharpening our awareness of the internal Palestinian schisms and their critical political implications.” —Kenneth W. Stein, Professsor of Contemporary Middle Eastern History and Political Science at Emory University, and author of The Land Question in Palestine,1917-1939

“The best scholars look at what everyone else looks at but see what others don't see. In "Hamas vs. Fatah: The Struggle for Palestine," Jonathan Schanzer joins the ranks of the most insightful observers the dynamics of the Arab-Israeli conflict by focusing his attention at "the struggle" that may have the greatest impact on the future disposition of the Palestinian independence movement * the intra-Palestinian contest between rival factions Hamas and Fatah, not the clash between Palestinians and Israelis. His fresh, timely and accessible account of the internal battle to control Palestinian identity over the past two decades is a signal contribution. This is must reading for our current and would-be secretaries of state.” —Robert Satloff, executive director, The Washington Institute for Near East Policy

“Hamas vs. Fatah explains in great detail the Arabic concept of Fitna, which means internal Muslim conflict [and] is highly recommended for anyone who wants to try to understand the Middle East and especially the Palestinians.” —Jewish Book Council

“The Palestinian world is not united. Jonathan Schanzer's new book, Hamas vs. Fatah, proves this beyond any reasonable doubt...[It] is highly recommended for anyone who wants to try to understand the Middle East and especially the Palestinians.” —Jewish Book World

“This book provides a comprehensive overview of this deep, hidden, bitter, and often lethal conflict within Palestinian society.” —Asian Affairs

Jonathan Schanzer is the director of policy at the Jewish Policy Center. He has served as counterterrorism analyst for the Office of Intelligence and Analysis at the U.S. Department of Treasury and as a research fellow at Washington Institute for Near East Policy, where he authored the book Al Qaeda’s Armies: Middle East Affiliate Groups and the Next Generation of Terror. He has appeared on Fox News, CNN, and Al-Jazeera. He lives in Washington, D.C.

Daniel Pipes is Editor of The Middle East Quarterly and Senior Lecturer at the University of Pennsylvania. He is the author of nine books and the editor of one.
Loading...
or support indie stores by buying on