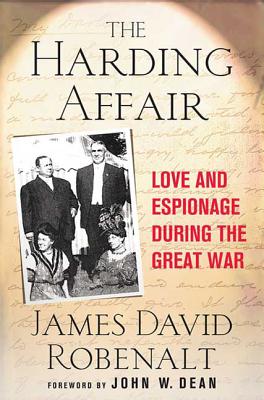 Love and Espionage during the Great War

Warren Harding fell in love with his beautiful neighbor, Carrie Phillips, in the summer of 1905, almost a decade before he was elected a United States Senator and fifteen years before he became the 29th President of the United States. When the two lovers started their long-term and torrid affair, neither of them could have foreseen that their relationship would play out against one of the greatest wars in world history--the First World War. Harding would become a Senator with the power to vote for war; Mrs. Phillips and her daughter would become German agents, spying on a U. S. training camp on Long Island in the hopes of gauging for the Germans the pace of mobilization of the U. S. Army for entry into the battlefields in France.

Based on over 800 pages of correspondence discovered in the 1960s but under seal ever since in the Library of Congress, The Harding Affair will tell the unknown stories of Harding as a powerful Senator and his personal and political life, including his complicated romance with Mrs. Phillips. The book will also explore the reasons for the entry of the United States into the European conflict and explain why so many Americans at the time supported Germany, even after the U. S. became involved in the spring of 1917.

James David Robenalt's comprehensive study of the letters is set in a narrative that weaves in a real-life spy story with the story of Harding's not accidental rise to the presidency.


Praise For The Harding Affair: Love and Espionage during the Great War…

“Intimate, revealing -- and sometimes downright embarrassing--the newly revealed love letters at the heart of The Harding Affair provide an altogether fresh look at a future American President hopelessly in love with a woman not his wife.” —Geoffrey C. Ward, author of A First-Class Temperament and The War: An Intimate History, 1941-1945

“Warren Harding has always been ranked as one of the worst U.S. presidents. But [this] book might just boost his image. Readers will see a tender, human side of Harding and also learn about his opposition to President Woodrow Wilson's nation-building efforts abroad after World War I--an issue that still resonates. If he had assumed the presidency in 1917 instead of 1921... [it may have] led to an outcome that would have drastically changed the course of the 20th century.” —The Columbus Dispatch

James David Robenalt is a partner in Thomson Hine LLP, a law firm based in Cleveland, Ohio. He was born and raised not far from Harding’s hometown in western Ohio, and comes from a family of leading Ohio Democrats. He is the author of The Harding Affair.

John W. Dean served as Richard Nixon’s White House counsel for a thousand days. He is the author of two books recounting his days in the Nixon administration, Blind Ambition and Lost Honor, as well as Unmasking Deep Throat. A native of Marion, Ohio, he lives in Beverly Hills, California.
Loading...
or support indie stores by buying on