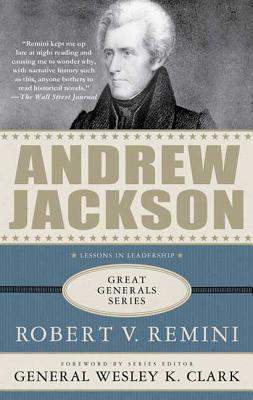 Andrew Jackson is best known as the president who created "Jacksonian democracy," with its focus on manifest destiny and laissez-faire economics. But rarely are his accomplishments as a general highlighted. Jackson's effective use of spies in war time and of martial law in peace time sparked a debate about the curtailing of civil liberties in the name of national security that continues to this day. Most of all, Jackson was a great motivator who could, with a few carefully selected words and by his own brave example, turn around starved, deserting troops, convincing them to fight. With dramatic scenes of fierce battles and victories, Remini reveals here why Jackson's bold leadership as a general led to his election as President of the United States in 1828.

Robert V. Remini was professor emeritus of history and the humanities at the University of Illinois at Chicago. Called the foremost Jacksonian scholar of our time by The New York Times, he was the recipient of a National Book Award.

General Wesley K. Clark served in the United States Army for thirty-four years and rose to the rank of four-star general as NATO's Supreme Allied Commander, Europe. He is author of the best selling books Waging Modern War and Winning Modern Wars. He lives in Little Rock, Arkansas.

“Lucid and straightforward, it will no doubt prove useful to cadets and military buffs of all ages. . .Remini is a scrupulous and honest researcher.” —New York Review of Books

“Remini, the prize-winning author of a multivolume biography of Jackson, proves a good choice for Palgrave's "Great Generals" study of Jackson from a military perspective. . . . [A] fine introduction based on years of advanced knowledge on the subject, distilled by Remini into a very good read. . . . General Clark's foreword offers a concise preview that effectively connects the book with the other books in this series. For a good story, a clear understanding of a formative--and controversial--figure in American history, this volume is strongly recommended.” —Library Journal

“Robert Remini, the greatest Jackson scholar alive, offers a long-overdue reevaluation of Jackson's military career. Writing with customary brio, Remini brings to life Jackson's battles and wars, but goes further to enlarge Jackson's reputation as a strategist and tactician, and to suggest how those skills aided him in his later political career. Here is a fine addition to what is turning into an excellent series of military biographies.” —Sean Wilentz, Princeton University, award-winning author of The Rise of American Democracy: Jefferson to Lincoln

“This Andrew Jackson biography is as exciting as it is important, and shows how a very complex military was molded from frontier clay during America's formative years.” —Donald A. Davis, bestselling author of Shooter and Kill Zone

“In prose that is characteristically clear and often stirring, America's foremost expert on Andrew Jackson and his time sheds new light on an as yet unexplored side of Old Hickory -- the relentless military man.” —Alan Pell Crawford, author of Twilight at Monticello: The Final Years of Thomas Jefferson

“When it comes to Jackson . . . there are few who have such a masterly command of the sources as Mr. Remini [who] kept me up late at night reading and causing me to wonder why, with narrative history such as this, anyone bothers to read historical novels.” —Roger D. McGrath, The Wall Street Journal

“Robert Remini, the dean of historians of Andrew Jackson, has done it again. In this vivid, insightful, and illuminating study of Jackson the general, Remini paints a revealing portrait of Jackson in the field. This is an essential book for anyone interested in one of the greatest and most controversial military leaders in American history. And on top of all that, it is a sprightly, entertaining read.” —Jon Meacham, editor of Newsweek