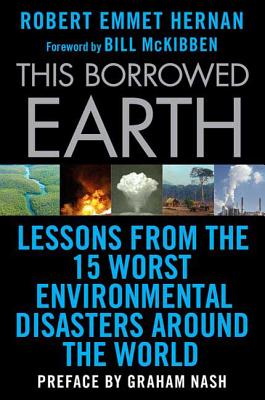 Lessons from the Fifteen Worst Environmental Disasters around the World (MacSci)

Over the last century mankind has irrevocably damaged the environment through the unscrupulous greed of big business and our own willful ignorance. Here are the strikingly poignant accounts of disasters whose names live in infamy: Chernobyl, Bhopal, Exxon Valdez, Three Mile Island, Love Canal, Minamata and others. And with these, the extraordinary and inspirational stories of the countless men and women who fought bravely to protect the communities and environments at risk.

Bill McKibben is a founder of the environmental organization 350.org and was among the first to have warned of the dangers of global warming. He is the author of fifteen books, including the bestsellers The End of Nature, Eaarth, and Deep Economy. He is the Schumann Distinguished Scholar in Environmental Studies at Middlebury College and the winner of the Gandhi Prize, the Thomas Merton Prize, and the Right Livelihood Prize. He lives in Vermont, with his wife the writer Sue Halpern.

Praise For This Borrowed Earth: Lessons from the Fifteen Worst Environmental Disasters around the World (MacSci)…

“Robert Hernan provides a deep service … May this book give heart and courage to many more such great souls, for there are assuredly many more such fights to come.” —from the foreword by Bill McKibben

“A wake-up call to all concerned citizens of this earth.” —from the preface by Graham Nash

“This Borrowed Earth: Lessons from Fifteen Environmental Disasters Around the World, powerfully depicts in simple, transparent prose, the lasting and wrenching impact of some of the major environmental disasters of the last century, which younger generations may only barely remember. But Mr. Hernan's book does much more. It reveals a striking similarity in the genesis of these disasters that can shed light on ways to prevent them in the future – in particular, the profit-driven development of production technologies with no heed to their health and environmental effects or the environmental fate of their products. One is convinced, after reading Mr. Hernan's book, that the only way to slow the rate of growth of devastating climate change is for governments around the world to assert control over our most basic technology – the production of energy in ways that can lift the world out of poverty without destroying it in the process.” —Barry Commoner

“Lets the facts and the victims speak for themselves. Again and again, we see polluters hiding or denying information, threatening those impacted by pollution, and putting profits before people. Hernan's stories show that each of these disasters were avoidable; we can only hope that by reading of them we all learn and avoid future ones.” —Peter Lehner, Executive Director, Natural Resources Defense Council