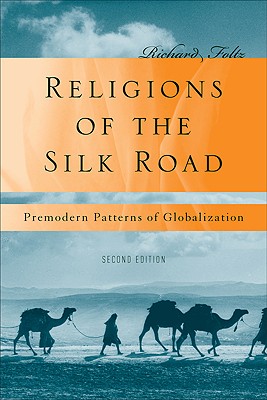 Religions of the Silk Road

Drawing on the latest research and scholarship, this newly revised and updated edition of Religions of the Silk Road explores the majestically fabled cities and exotic peoples that make up the romantic notions of the colonial era.

Praise For Religions of the Silk Road: Premodern Patterns of Globalization…

"This brief but tightly packed book is a wonderful counterweight to romanticized notions of the so-called Silk Road . . . Foltz masterfully deals with disparate histories from one point of the compass to its seeming opposite, while weaving a wonderfully lucid story of merchants, pilgrims, and missionaries."--The Journal of Asian History "Professor Foltz excels at concise explanations of the development of the many religions scattered throughout the central Asian area of the Silk Road . . . Throughout this excellent book Professor Foltz makes clear the importance of trade and cultural exchanges in the unfolding of history."--Journal of World History "Foltz takes us on an instructive journey through time and space, revealing the fluidity of barriers, geographical and otherwise, on the historical trail and bypaths of the 'Silk Road,' which stretches from China in the East and across Central Asia to the shores of the Mediterranean in the West."--History: Reviews of New Books ". . . an absolute gem . . . well researched and well written, it brings together a huge amount of information in an attractive package."--Jerry H. Bentley, Editor, Journal of World History "This was an extraordinary book when it first came out a decade ago; it is an even more impressive work in its revised second edition. What makes Richard Foltz's Religions of the Silk Road so unusual and valuable is that, despite its concise, compressed form and highly readable style, it is packed with an astonishing wealth of fascinating information based on a judicious combination of primary sources and secondary literature. For someone who wishes to learn about the transmission of religious culture along the Silk Road during the past two millennia -- including Zoroastrianism, Buddhism, Manichaeism, Nestorian Christianity, Judaism, and Islam -- there can be no more convenient and illuminating guide than this extraordinary volume."--Victor H. Mair, Professor of Chinese Language and Literature, University of Pennsylvania "To read this fascinating book is to journey through time, to ride those intriguing stretches of overland trails from Europe to Asia known collectively as the 'Silk Road.' There strands of Buddhism, Zoroastrianism, Manichaeism, Christianity, Judaism, and Islam all intertwined and sometimes converged, making for a time eastern Central Asia the most multicultural region on the planet. Foltz brings to life this amazing history in an authoritative and engrossing way, and entices us into this wondrous early era of globalized religion."--Mark Juergensmeyer, University of California, Santa Barbara; Editor of the Oxford Handbook of Global Religion; President of the American Academy of Religion ". . . an excellent text to use in a course on 'Eastern' religions, or on the historical-social-economic-religious development of that part of the world from the eastern Mediterranean across the Eurasian steppe through to China. . . . Foltz writes with a very deft balance and a very even-handed presentation of many different historical periods, geographical circumscriptions, and religious traditions."--Eastern Christian Books Blog

RICHARD C. FOLTZ is an Associate Professor of Religion at Concordia University. He is the author of Animals in Islamic Tradition and Muslim Cultures (2006) and editor of Environmentalism in the Muslim World (2005) and Worldviews, Religion, and the Environment: A Global Anthology (2003).
Loading...
or support indie stores by buying on