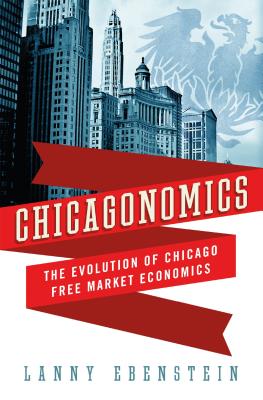 Chicagonomics explores the history and development of classical liberalism as taught and explored at the University of Chicago. Ebenstein's tenth book in the history of economic and political thought, it deals specifically in the area of classical liberalism, examining the ideas of Friedrich Hayek and Milton Friedman, and is the first comprehensive history of economics at the University of Chicago from the founding of the University in 1892 until the present. The reader will learn why Chicago had such influence, to what extent different schools of thought in economics existed at Chicago, the Chicago tradition, vision, and what Chicago economic perspectives have to say about current economic and social circumstances.

LANNY EBENSTEIN is a Lecturer in the Department of Economics at UCSB, teaching the history of economic and political thought. From 1990 to 1998, Dr. Ebenstein was an elected member of the Santa Barbara Board of Education. He has written ten books on the history of economic and political thought, including the first biographies of Friedrich Hayek and Milton Friedman. His work is frequently cited in publications from a wide range of disciplines and perspectives, and has been translated into a number of foreign languages. He lives in Santa Barbara, CA.

Praise For Chicagonomics: The Evolution of Chicago Free Market Economics…

“Chicagonomics, a new book by Lanny Ebenstein, a prolific author on the history of economic thought, sets out to investigate the history of the Chicago school of economics, to see what can be learnt for today from its past...deserves to be read by all those with an interest in economic policy." —The Economist

“Ebenstein, the son of a political scientist who taught briefly at the University of Chicago, has written 10 books on economic and political history ... With this book, he joins a group of detractors of modern-day American conservatism who are sympathetic to many of the ideas of conservatism but harshly critical of how it is now practiced.” —New York Times Book Review

“For better or for worse, and it has been some of both, economics at the University of Chicago has had an immense impact on the profession and on the world. This important book tells that very important story in a lively and entertaining way.” —Lawrence Summers, Secretary of the Treasury under President Clinton, Former President of Harvard

“I have learned much from your book and I congratulate you for doing a fine bit of work. I especially appreciate what you wrote about Hayek.” —Lester Telser, Professor Emeritus of Economics, University of Chicago

“Chicagoeconomics has had a profound impact on economic science. This accessible and enjoyable book tells the story starting from its origins. Readers will discover that chicagoeconomics is richer and more nuanced than its cliche image of market fundamentalists.” —Emmanuel Saez, Professor of Economics, University of California at Berkeley

“A detailed argument and an absorbing narrative combine in this important contribution to the field.” —Kirkus Reviews

“Well-written and useful. You can read about Henry Simons, the Cowles Commission, Hayek, Jacob Marschak, of course Milton Friedman, and much more.” —Tyler Cowen, Professor of Economics, George Mason University

“...Offers a comprehensive and noteworthy examination of the University of Chicago's influence on economic theory in the U.S… accessible, clear, and entertaining.” —Publisher's Weekly