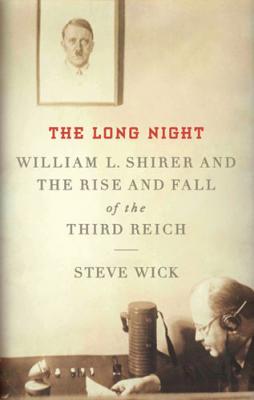 William L. Shirer and the Rise and Fall of the Third Reich

The story of legendary American journalist William L. Shirer and how his first-hand reporting on the rise of the Nazis and on World War II brought the devastation alive for millions of Americans

When William L. Shirer started up the Berlin bureau of Edward R. Murrow's CBS News in the 1930s, he quickly became the most trusted reporter in all of Europe. Shirer hit the streets to talk to both the everyman and the disenfranchised, yet he gained the trust of the Nazi elite and through these contacts obtained a unique perspective of the party's rise to power.

Unlike some of his esteemed colleagues, he did not fall for Nazi propaganda and warned early of the consequences if the Third Reich was not stopped. When the Germans swept into Austria in 1938 Shirer was the only American reporter in Vienna, and he broadcast an eyewitness account of the annexation. In 1940 he was embedded with the invading German army as it stormed into France and occupied Paris. The Nazis insisted that the armistice be reported through their channels, yet Shirer managed to circumvent the German censors and again provided the only live eyewitness account. His notoriety grew inside the Gestapo, who began to build a charge of espionage against him. His life at risk, Shirer had to escape from Berlin early in the war. When he returned in 1946 to cover the Nuremberg trials, Shirer had seen the full arc of the Nazi menace. It was that experience that inspired him to write "The Rise and Fall of the Third Reich "the magisterial, definitive history of the most brutal ten years the modern world had known which has sold millions of copies and has become a classic.

Drawing on never-before-seen journals and letters from Shirer's time in Germany, award-winning reporter Steve Wick brings to life the maverick journalist as he watched history unfold and first shared it with the world.


Praise For The Long Night: William L. Shirer and the Rise and Fall of the Third Reich…

“It’s this Shirer — the human being, a man of determination and steely nerve — that Mr. Wick gets onto the pages of his book.” --Dwight Garner, The New York Times

"Illuminating . . . Wick has done an excellent job in bringing together the man's life and work in this detailed and probing biography." – The St. Petersburg Times

"The Long Night is indeed an adventure story, with short chapters and a fast-paced narrative drive. But Mr. Wick has documented the story with scrupulous attention to detail, too, drawing on Shirer's published works as well as his papers and correspondence." -- The Wall Street Journal

"Steve Wick makes excellent use of Shirer’s letters and papers to chronicle his often fraught relationships . . . A seasoned journalist, Wick knows how to tell a good story, and for long stretches his book reads like a novel . . . [It] has much of interest to say about the life of a foreign correspondent in the war-torn Europe of the 1930s and early 1940s." -- Richard Evans, The New Republic

"A suspenseful recasting of the same period covered in Berlin Diary, using the published diary but more importantly the original handwritten pages Shirer smuggled out of Berlin . . . Wick has used his resources scrupulously and illuminates, more than does the 1941 book, the heavy personal toll that remaining in Berlin took on Shirer and his family." --Columbia Journalism Review

"A gripping account of a courageous journalist's efforts to alert the world to Hitler's plan, and an engaging discussion of the relationship between journalism and personal integrity, which is as relevant today as it was then."--Kirkus Reviews

"A thought-provoking and accessible exposition about the man, the times in which he worked, and the book itself." --Jewish Book World

“Working as a foreign correspondent in Hitler's Germany was a harrowing experience, but William L. Shirer was among those who delivered exceptional journalism despite the circumstances.  In The Long Night, Steve Wick skillfully describes Shirer's courage and persistence during these years.”--Philip Seib, author of Broadcasts from the Blitz: How Edward R. Murrow Helped Lead America into War

"Steve Wick tells the human story behind William Shirer's brilliant and perceptive radio broadcasts from Nazi Berlin.  Making extensive use of Shirer's private papers, he succeeds in incorporating the high politics, the everyday and the personal in a single, elegantly-written and engaging narrative."--Roger Moorhouse, author of Killing Hitler

“In Steve Wick’s talented hands, The Long Night puts you in the shoes of William Shirer and lets you experience the frightful, yet fascinating buildup of the Nazi regime for yourself. This account of one gutsy journalist witnessing history in the making is top-notch, an engrossing page turner that will have you eager to see what happens next. The Long Night stands out as a keen telling of  one man’s eventful life, while also offering a unique perspective on an important moment in time. A compelling read.”--Greg Freeman, author of The Last Mission of the Wham Bam Boys

Steve Wick is a senior editor at "Newsday" and the author of "Bad Company: Drugs, Hollywood and the Cotton Club Murder," among others. He has been a journalist for 30 years and has won dozens of writing and reporting awards, including sharing in two Pulitzer Prizes for local reporting.
Loading...
or
Not Currently Available for Direct Purchase