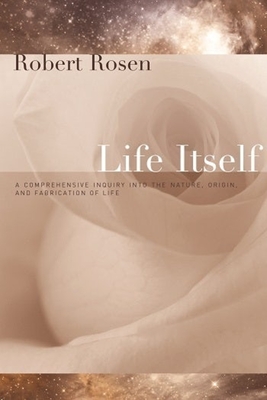 A Comprehensive Inquiry Into the Nature, Origin, and Fabrication of Life (Complexity in Ecological Systems)

Why are living things alive? As a theoretical biologist, Robert Rosen saw this as the most fundamental of all questions-and yet it had never been answered satisfactorily by science. The answers to this question would allow humanity to make an enormous leap forward in our understanding of the principles at work in our world. For centuries, it was believed that the only scientific approach to the question "What is life?" must proceed from the Cartesian metaphor (organism as machine). Classical approaches in science, which also borrow heavily from Newtonian mechanics, are based on a process called "reductionism." The thinking was that we can better learn about an intricate, complicated system (like an organism) if we take it apart, study the components, and then reconstruct the system-thereby gaining an understanding of the whole. However, Rosen argues that reductionism does not work in biology and ignores the complexity of organisms. Life Itself, a landmark work, represents the scientific and intellectual journey that led Rosen to question reductionism and develop new scientific approaches to understanding the nature of life. Ultimately, Rosen proposes an answer to the original question about the causal basis of life in organisms. He asserts that renouncing the mechanistic and reductionistic paradigm does not mean abandoning science. Instead, Rosen offers an alternate paradigm for science that takes into account the relational impacts of organization in natural systems and is based on organized matter rather than on particulate matter alone. Central to Rosen's work is the idea of a "complex system," defined as any system that cannot be fully understood by reducing it to its parts. In this sense, complexity refers to the causal impact of organization on the system as a whole. Since both the atom and the organism can be seen to fit that description, Rosen asserts that complex organization is a general feature not just of the biosphere on Earth-but of the universe itself.

Dr. Robert Rosen (1934-1998) was a prominent theorist in the areas of biology and biophysics and taught and conducted research at various universities for over three decades. He was the author of thirteen books, including Anticipatory Systems; Fundamentals of Measurement and Representation of Natural Systems; Rosennean Complexity; and The Limits of the Limits of Science.
or support indie stores by buying on