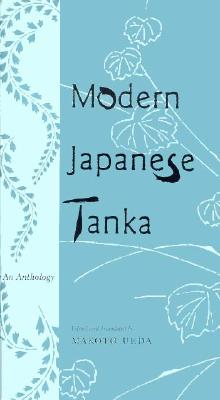 Tanka, a clasical Japanese verse form like haiku, has experienced a resurgence of interest among twentieth-century poets and readers. Arguably the central genre of Japanese literature, the 31-syllable lyric made up the great majority of Japanese poetry from the ninth to the nineteenth century and was the inspiration for such poetry as haiku and renga. Tanka has begun to attract considerable attention in North America in recent years. Modern Japanese Tanka is the first comprehensive collection available in English. Tanka retains the aesthetic sensibilities that circumscribe Japanese culture, but just as Japan has changed during this tumultuous century, tanka has undergone equally radical shifts. Responding to artistic and social movements of the West, tanka has incorporated influences ranging from Marxism to Avant-Garde. Modern Japanese Tanka includes four hundred poems by twenty of Japan's most renowned poets who have made major contributions to the hisotry of tanka in the late nineteenth and early twentieth centuries. With his graceful, eloquent translations, Makoto Ueda captures the distinct voices of these individual poets, providing biographical sketches of each as well as transliterating Japanese text below each poem. His introduction gives an excellent overview of the development of tanka in the last one hundred years. Tracing the contemporary tanka tradition from Yosana Tekkan in the late nineteenth century to the late twentieth-century poetry of such writers as Taware Machi, Modern Japanese Tankselegantly conveys an authentic sense of Japanese lyric to a Western audience.

MAKOTO UEDA is Professor of Japanese at Stanford University.
or
Not Currently Available for Direct Purchase
Copyright © 2020 American Booksellers Association