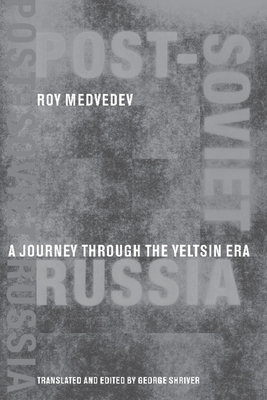 A Journey Through the Yeltsin Era

Roy Medvedev, one of the world's best-known Russian scholars and a former consultant to both Gorbachev and Yeltsin analyzes the main events that have transpired in the Russian federation since late August 1991. He looks at the plans that were meant to restructure a society in crisis but--for reasons both complex and obvious--were destined to fail. From the drastic liberalization of prices and "shock therapy" to the privatization of state owned property and Yeltsin's resignation and replacement by Vladimir Putin, this is an intricately fascinating saga of good intentions, philosophical warfare, and catastrophic miscalculations. Among the many compelling facts detailed here are Yeltsin's utter surprise--and lack of preparation--at the failed coup against Gorbachev in 1991, when power fell virtually into his lap; his failure to heed the warnings of learned advisers like Yuri Yaremenko, who knew that Western economics could not be applied to Russia; and Yeltsin's dramatic (and unprecedented) decree in 1992 allowing anyone to sell or buy anything they wished. In a sweeping conclusion covering the critical events of 1998 and 1999 as well as a detailed analysis of the 1995 and 1996 elections, Medvedev lays forth an exhaustive survey of recent political shifts, attitudes, statistics, and trends. From birth and death rates on the farm and in the city through a number of highly charged campaigns and elections to the new goal of the Communist Youth League (to become millionaires), this is a breathtakingly detailed survey of an unforgettable chapter in Russia's history.

Roy Medvedev, a historian and political activist, was a member of the Soviet parliament from 1989 to 1991. He is the author of numerous books, including Khrushchev: The Years in Power; On Soviet Dissent; The October Revolution; and Let History Judge: The Origins and Consequences of Stalinism.George Shriver has translated and edited several books, including Let History Judge, The October Revolution, and Gorbachev: On My Country and the World (Columbia).
Loading...
or support indie stores by buying on