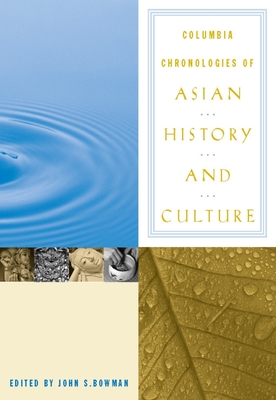 Containing more information on Asian culture than any other English-language reference work, Columbia Chronologies of Asian History and Culture is the first of its kind: a set of more than thirty chronologies for all the countries of Asia--East, South, Southeast, and Central--from the Paleolithic era through 1998. Each entry is clearly dated and, unlike most chronologies found in standard history texts, the entries are complete and detailed enough to provide virtually a sequential history of the vast and rich span of Asian cultures. The contributing writers and editors have ensured the book's usefulness to general readers by identifying individuals and groups, locating places and regions, explaining events and movements, and defining unfamiliar words and concepts. The thirty-two chronologies on individual countries, in conjunction with a detailed index, allow readers to find specific information quickly and efficiently, whether they seek the date for the invention of the iron plow or gunpowder, the fall of the Han Dynasty in China, or Ho Chi Minh's declarations of Vietnamese independence. This invaluable reference culminates with three appendices: "National/Independence Days," "Scientific-Technological Achievements in Asia," and "Asia: A Chronological Overview," which provides an accessible summary of key events and developments in various fields of activity throughout the continent. The Columbia Chronologies of Asian History and Culture features: - three discrete chronologies on (1) Politics/History, (2) Art/Culture/Religion, and (3) Science/Economics/Everyday Life for each of Asia's three major cultures--China, India, and Japan--as well as a combined chronology for each of the other nations; - detailed entries of thousands of historical events as well as important milestones in religion, philosophy, literature, and the arts; - entries on technological developments and natural events (famines, floods, etc.) affecting the lives of ordinary people; and - authoritative and accessibly written entries by a team of Asian scholars from Columbia, Harvard, and other major research universities. Beyond its detailed accounting of Asia's political history, Columbia Chronologies of Asian History and Culture also gives full recognition to religious, intellectual, artistic, and general cultural achievements, as well as to scientific, technological, industrial, agricultural, and economic developments. Concise yet complete, it will stand as an indispensable reference work in the field of Asian studies.

John Bowman has been an editor and writer for over forty years, beginning at Natural History Magazine and then at the Book of Knowledge before becoming an independent editor. Among the many works he has edited are The Cambridge Dictionary of American Biography, The Almanac of the Vietnam War, and Chronicle of the Twentieth Century. He contributed chronologies of Asian religions to the Chronology of World Religions.
Loading...
or
Not Currently Available for Direct Purchase