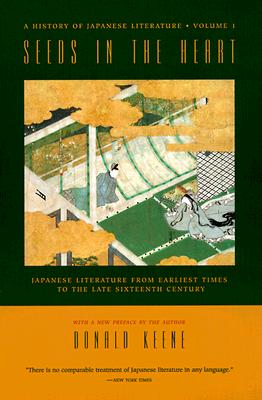 Seeds in the Heart

Donald Keene employs his prodigious wealth of knowledge, critical insight, and narrative aplomb to guide readers through the first nine hundred years of Japanese literature--a period that not only defined the unique properties of Japanese prosody and prose but also produced some of its greatest works. Covering courtly fiction, Buddhist writings, war tales, diaries, poems, and more, Seeds in the Heart explores a vast and variegated treasury of writings. Detailed textual examinations of classic texts--from the Kojiki to The Tale of Genji, from The Pillow Book of Sei Sh nagon to Zeami's N plays--allow students, lay readers, and scholars a new understanding and enjoyment of this great literature.

Donald Keene is Shincho Professor of Japanese Literature and University Professor Emeritus at Columbia University. He is the author of a multivolume history of Japanese literature, of which Seeds in the Heart is the first part, and at least thirty other books, including many translations from Japanese literature. He has received numerous honors in both the United States and Japan, and is a member of the American Academy and Institute of Arts and Letters.
Loading...
or
Not Currently Available for Direct Purchase