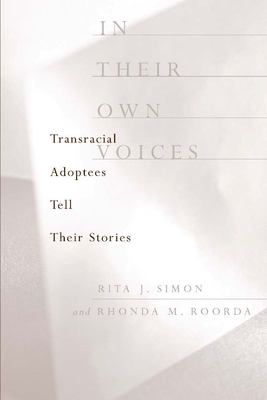 In Their Own Voices

Nearly forty years after researchers first sought to determine the effects, if any, on children adopted by families whose racial or ethnic background differed from their own, the debate over transracial adoption continues. In this collection of interviews conducted with black and biracial young adults who were adopted by white parents, the authors present the personal stories of two dozen individuals who hail from a wide range of religious, economic, political, and professional backgrounds. How does the experience affect their racial and social identities, their choice of friends and marital partners, and their lifestyles? In addition to interviews, the book includes overviews of both the history and current legal status of transracial adoption.

The late Rita J. Simon was University Professor in the School of Public Affairs and the Washington College of Law at American University. Rhonda Roorda was adopted into a white family in the Washington, D.C., metropolitan area. She is the recipient of the 2010 Judge John P. Steketee Adoption Hero Award from the Adoptive Family Support Network (MI). In 2017, Rhonda was awarded the Friend of Children and Youth Award from the North American Council on Adoptable Children (NACAC). She is coordinator of financial and support services at a nonprofit educational advocacy organization in Lansing, Michigan.
Loading...
or support indie stores by buying on