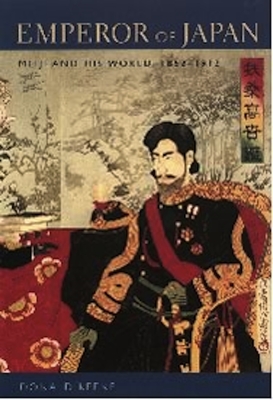 When Emperor Meiji began his rule, in 1867, Japan was a splintered empire, dominated by the shogun and the daimyos, who ruled over the country's more than 250 decentralized domains and who were, in the main, cut off from the outside world, staunchly antiforeign, and committed to the traditions of the past. Before long, the shogun surrendered to the emperor, a new constitution was adopted, and Japan emerged as a modern, industrialized state. Despite the length of his reign, little has been written about the strangely obscured figure of Meiji himself, the first emperor ever to meet a European. Most historians discuss the period that takes his name while barely mentioning the man, assuming that he had no real involvement in affairs of state. Even Japanese who believe Meiji to have been their nation's greatest ruler may have trouble recalling a single personal accomplishment that might account for such a glorious reputation. Renowned Japan scholar Donald Keene sifts the available evidence to present a rich portrait not only of Meiji but also of rapid and sometimes violent change during this pivotal period in Japan's history. In this vivid and engrossing biography, we move with the emperor through his early, traditional education; join in the formal processions that acquainted the young emperor with his country and its people; observe his behavior in court, his marriage, and his relationships with various consorts; and follow his maturation into a "Confucian" sovereign dedicated to simplicity, frugality, and hard work. Later, during Japan's wars with China and Russia, we witness Meiji's struggle to reconcile his personal commitment to peace and his nation's increasingly militarized experience of modernization. Emperor of Japan conveys in sparkling prose the complexity of the man and offers an unrivaled portrait of Japan in a period of unique interest.

Donald Keene is Shincho Professor of Japanese Literature and University Professor Emeritus at Columbia University. He is the author of more than thirty books, including the definitive multi-volume history of Japanese literature. He lives in Tokyo and New York City.
or support indie stores by buying on
Copyright © 2020 American Booksellers Association