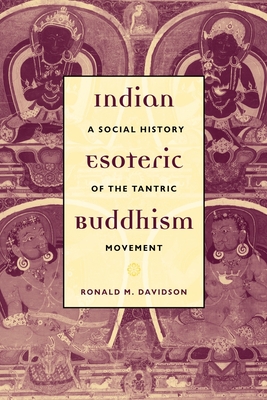 A Social History of the Tantric Movement

Despite the rapid spread of Buddhism--especially the esoteric system of Tantra, one of its most popular yet most misunderstood forms--the historical origins of Buddhist thought and practice remain obscure. This groundbreaking work describes the genesis of the Tantric movement in early medieval India, where it developed as a response to, and in some ways an example of, the feudalization of Indian society. Drawing on primary documents--many translated for the first time--from Sanskrit, Prakrit, Tibetan, Bengali, and Chinese, Ronald Davidson shows how changes in medieval Indian society, including economic and patronage crises, a decline in women's participation, and the formation of large monastic orders, led to the rise of the esoteric tradition in India that became the model for Buddhist cultures in China, Tibet, and Japan.

Ronald M. Davidson is professor of religious studies and director of the program in Asian studies at Fairfield University in Connecticut. He is the coauthor (with Steven D. Goodman) of Tibetan Buddhism: Reason and Revelation.
or support indie stores by buying on
Copyright © 2020 American Booksellers Association