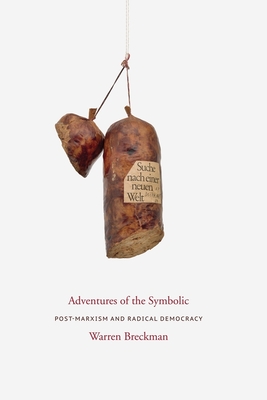 Adventures of the Symbolic (Hardcover)

Marxism's collapse in the twentieth century profoundly altered the style and substance of Western European radical thought. To build a more robust form of democratic theory and action, prominent theorists moved to reject revolution, abandon class for more fragmented models of social action, and elevate the political over the social. Acknowledging the constructedness of society and politics, they chose the "symbolic" as a concept powerful enough to reinvent leftist thought outside a Marxist framework. Following Maurice Merleau-Ponty's Adventures of the Dialectic, which reassessed philosophical Marxism at mid century, Warren Breckman critically revisits these thrilling experiments in the aftermath of Marxism. The post-Marxist idea of the symbolic is dynamic and complex, uncannily echoing the early German Romantics, who first advanced a modern conception of symbolism and the symbolic. Hegel and Marx denounced the Romantics for their otherworldly and nebulous posture, yet post-Marxist thinkers appreciated the rich potential of the ambiguities and paradoxes the Romantics first recognized. Mapping different ideas of the symbolic among contemporary thinkers, Breckman traces a fascinating reflection of Romantic themes and resonances, and he explores in depth the effort to reconcile a radical and democratic political agenda with a politics that does not privilege materialist understandings of the social. Engaging with the work of Claude L vi-Strauss, Cornelius Castoriadis, Claude Lefort, Marcel Gauchet, Ernesto Laclau, Chantal Mouffe, and Slavoj iek, Breckman uniquely situates these important theorists within two hundred years of European thought and extends their profound relevance to today's political activism.

Warren Breckman is the Rose Family Endowed Term Professor of modern European intellectual history at the University of Pennsylvania. He is the author of Marx, the Young Hegelians, and the Origins of Radical Social Theory: Dethroning the Self and European Romanticism A Brief History with Documents. He is also executive coeditor of the Journal of the History of Ideas.
or
Not Currently Available for Direct Purchase
Copyright © 2020 American Booksellers Association