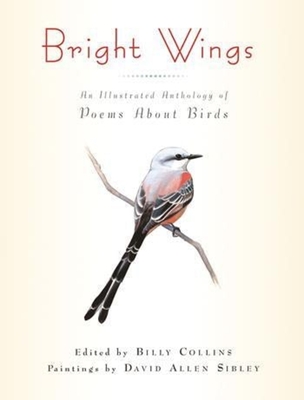 An Illustrated Anthology of Poems about Birds

In this beautiful collection of poems and paintings, Billy Collins, former U.S. poet laureate, joins with David Allen Sibley, America's foremost bird illustrator, to celebrate the winged creatures that have inspired so many poets to sing for centuries. From Catullus and Chaucer to Robert Browning and James Wright, poets have long treated birds as powerful metaphors for beauty, escape, transcendence, and divine expression. Here, in this substantial anthology, more than one hundred contemporary and classic poems are paired with close to sixty original, ornithologically precise illustrations. Part poetry collection, part field guide, part art book, Bright Wings presents verbal and visual interpretations of the natural world and reminds us of our intimate connection to the "bright wings" around us. Each in their own way, these poems and pictures honor the enchanting creatures that have been, and continue to be, longtime collaborators with the poet's and painter's art. Poet and bird pairings include: Wallace Stevens and the Blackbird; Emily Dickinson and the Robin; Marianne Moore and the Frigate Pelican; Thomas Hardy and the Goldfinch; Sylvia Plath and the Pheasant; John Updike and the Seagull; Walt Whitman and the Eagle; Billy Collins and the Sparrow.

Billy Collins is Distinguished Professor of English at Lehman College and the author of eight books of poetry, including Ballistics, The Trouble with Poetry: and Other Poems, Nine Horses, Sailing Alone Around the World, and Questions About Angels, which was selected by Edward Hirsch for the National Poetry Series. He has received fellowships from the New York Foundation for the Arts, the National Endowment for the Arts, and the Guggenheim Foundation, and has served two terms as the poet laureate of the United States, along with one term as New York State Poet. Collins divides his time between New York and Winter Park, Florida. David Allen Sibley has spent most of his life traveling across North America, studying and drawing the natural world. With the National Audubon Society, he published The Sibley Guide to Birds in 2004 and The Sibley Guide to Trees in 2009. He lives with his family in Concord, Massachusetts, and his work can be viewed at www.sibleyguides.com.
Loading...
or support indie stores by buying on