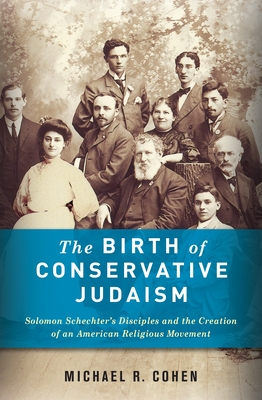 The Birth of Conservative Judaism (Hardcover)

Solomon Schechter's Disciples and the Creation of an American Religious Movement

Solomon Schechter (1847-1915), the charismatic leader of New York's Jewish Theological Seminary (JTS), came to America in 1902 intent on revitalizing traditional Judaism. While he advocated a return to traditional practices, Schechter articulated no clear position on divisive issues, instead preferring to focus on similarities that could unite American Jewry under a broad message. Michael R. Cohen demonstrates how Schechter, unable to implement his vision on his own, turned to his disciples, rabbinical students and alumni of JTS, to shape his movement. By midcentury, Conservative Judaism had become the largest American Jewish grouping in the United States, guided by Schechter's disciples and their continuing efforts to embrace diversity while eschewing divisive debates. Yet Conservative Judaism's fluid boundaries also proved problematic for the movement, frustrating many rabbis who wanted a single platform to define their beliefs. Cohen demonstrates how a legacy of tension between diversity and boundaries now lies at the heart of Conservative Judaism's modern struggle for relevance. His analysis explicates four key claims: that Conservative Judaism's clergy, not its laity or Seminary, created and shaped the movement; that diversity was--and still is--a crucial component of the success and failure of new American religions; that the Conservative movement's contemporary struggle for self-definition is tied to its origins; and that the porous boundaries between Orthodox, Conservative, and Reform Judaism reflect the complexity of the American Jewish landscape--a fact that Schechter and his disciples keenly understood. Rectifying misconceptions in previous accounts of Conservative Judaism's emergence, Cohen's study enables a fresh encounter with a unique religious phenomenon.

Michael R. Cohen is director of Jewish Studies at Tulane University in New Orleans. He received his Ph.D. in Near Eastern and Judaic studies from Brandeis University and his A.B. with honors from Brown University. A recipient of the American Jewish Historical Society's Ruth B. Fein Prize and a Bernard and Audre Rapoport Fellowship at the American Jewish Archives, he is also a Monroe Fellow at the New Orleans Gulf South Center at Tulane University.
or
Not Currently Available for Direct Purchase
Copyright © 2020 American Booksellers Association