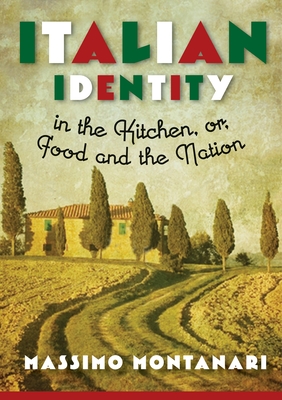 Italian Identity in the Kitchen, or Food and the Nation (Arts and Traditions of the Table

Massimo Montanari draws readers into the far-flung story of how local and global influences came to flavor Italian identity. The fusion of ancient Roman cuisine--which consisted of bread, wine, and olives--with the barbarian diet--rooted in bread, milk, and meat--first formed the basics of modern eating across Europe. From there, Montanari highlights the importance of the Italian city in the development of gastronomic taste in the Middle Ages, the role of Arab traders in positioning the country as the supreme producers of pasta, and the nation's healthful contribution of vegetables to the fifteenth-century European diet. Italy became a receiving country with the discovery of the New World, absorbing corn, potatoes, and tomatoes into its national cuisine. As disaster dispersed Italians in the nineteenth century, new immigrant stereotypes portraying Italians as "macaroni eaters" spread. However, two world wars and globalization renewed the perception of Italy and its culture as unique in the world, and the production of food constitutes an important part of that uniqueness.

Massimo Montanari is professor of medieval history and the history of food in the Department of History and Cultures at the University of Bologna. His books include Let the Meatballs Rest: And Other Stories About Food and Culture; Cheese, Pears, and History in a Proverb; Food Is Culture; Italian Cuisine: A Cultural History; Food: A Culinary History; and Famine and Plenty: The History of Food in Europe. Beth Archer Brombert is the author of two widely acclaimed biographies: Cristina: Portraits of a Princess and Edouard Manet: Rebel in a Frock Coat. Her most recent work is a memoir of many decades of living, traveling, and cooking in Italy, Journey to the World of the Black Rooster.
Loading...
or support indie stores by buying on