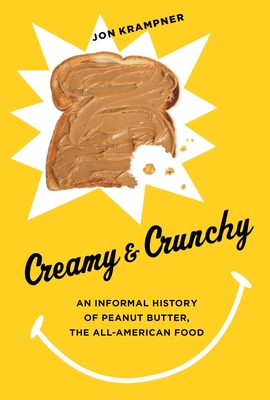 An Informal History of Peanut Butter, the All-American Food (Arts and Traditions of the Table: Perspectives on Culinary H)

More than Mom's apple pie, peanut butter is the all-American food. With its rich, roasted-peanut aroma and flavor; caramel hue; and gooey, consoling texture, peanut butter is an enduring favorite, found in the pantries of at least 75 percent of American kitchens. Americans eat more than a billion pounds a year. According to the Southern Peanut Growers, a trade group, that's enough to coat the floor of the Grand Canyon (although the association doesn't say to what height). Americans spoon it out of the jar, eat it in sandwiches by itself or with its bread-fellow jelly, and devour it with foods ranging from celery and raisins ("ants on a log") to a grilled sandwich with bacon and bananas (the classic "Elvis"). Peanut butter is used to flavor candy, ice cream, cookies, cereal, and other foods. It is a deeply ingrained staple of American childhood. Along with cheeseburgers, fried chicken, chocolate chip cookies (and apple pie), peanut butter is a consummate comfort food. In Creamy and Crunchy are the stories of Jif, Skippy, Peter Pan; the plight of black peanut farmers; the resurgence of natural or old-fashioned peanut butter; the reasons why Americans like peanut butter better than (almost) anyone else; the five ways that today's product is different from the original; the role of peanut butter in fighting Third World hunger; and the Salmonella outbreaks of 2007 and 2009, which threatened peanut butter's sacred place in the American cupboard. To a surprising extent, the story of peanut butter is the story of twentieth-century America, and Jon Krampner writes its first popular history, rich with anecdotes and facts culled from interviews, research, travels in the peanut-growing regions of the South, personal stories, and recipes.

Jon Krampner is the author of The Man in the Shadows: Fred Coe and the Golden Age of Television and Female Brando: The Legend of Kim Stanley. He received an A.B. in English literature from Occidental College and an M.A. in journalism from the University of Wisconsin-Madison. He lives in Los Angeles. Web site: www.creamyandcrunchy.comE-mail: pbj@creamyandcrunchy.comTwitter: @pbj06
Loading...
or support indie stores by buying on