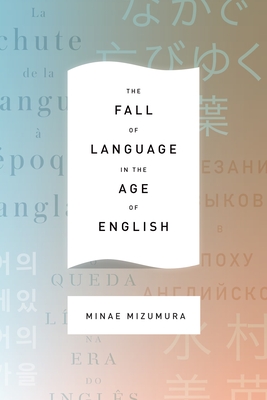 The Fall of Language in the Age of English (Paperback)

Winner of the Kobayashi Hideo Award, The Fall of Language in the Age of English lays bare the struggle to retain the brilliance of one's own language in this period of English-language dominance. Born in Tokyo but raised and educated in the United States, Minae Mizumura acknowledges the value of a universal language in the pursuit of knowledge yet also embraces the different ways of understanding offered by multiple tongues. She warns against losing this precious diversity. Universal languages have always played a pivotal role in advancing human societies, Mizumura shows, but in the globalized world of the Internet, English is fast becoming the sole common language of humanity. The process is unstoppable, and striving for total language equality is delusional--and yet, particular kinds of knowledge can be gained only through writings in specific languages. Mizumura calls these writings "texts" and their ultimate form "literature." Only through literature and, more fundamentally, through the diverse languages that give birth to a variety of literatures, can we nurture and enrich humanity. Incorporating her own experiences as a writer and a lover of language and embedding a parallel history of Japanese, Mizumura offers an intimate look at the phenomena of individual and national expression.

Minae Mizumura was born in Tokyo, moved to New York at the age of twelve, and studied French literature at Yale University. Acclaimed for her audacious experimentation and skillful storytelling, Mizumura has won major literary awards for all four of her novels--one of which, A True Novel, was recently published in English. She lives in Tokyo. Mari Yoshihara is professor of American studies at the University of Hawai'i at Manoa. She is the author of Embracing the East: White Women and American Orientalism and Musicians from a Different Shore: Asians and Asian Americans in Classical Music. Juliet Winters Carpenter studied Japanese literature at the University of Michigan and the Inter-University Center for Japanese Language Studies in Tokyo. In 1980, Carpenter's translation of Abe Kobo's novel Secret Rendezvous (Mikkai) won the Japan-United States Friendship Commission Prize for the Translation of Japanese Literature.
or support indie stores by buying on
Copyright © 2020 American Booksellers Association