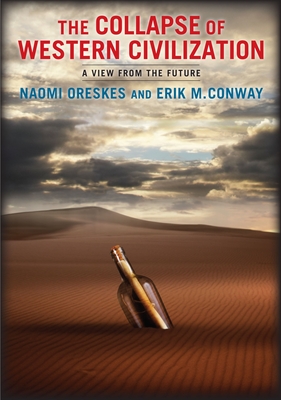 The Collapse of Western Civilization

A View from the Future

The year is 2393, and the world is almost unrecognizable. Clear warnings of climate catastrophe went ignored for decades, leading to soaring temperatures, rising sea levels, widespread drought and--finally--the disaster now known as the Great Collapse of 2093, when the disintegration of the West Antarctica Ice Sheet led to mass migration and a complete reshuffling of the global order. Writing from the Second People's Republic of China on the 300th anniversary of the Great Collapse, a senior scholar presents a gripping and deeply disturbing account of how the children of the Enlightenment--the political and economic elites of the so-called advanced industrial societies--failed to act, and so brought about the collapse of Western civilization. In this haunting, provocative work of science-based fiction, Naomi Oreskes and Eric M. Conway imagine a world devastated by climate change. Dramatizing the science in ways traditional nonfiction cannot, the book reasserts the importance of scientists and the work they do and reveals the self-serving interests of the so called "carbon combustion complex" that have turned the practice of science into political fodder. Based on sound scholarship and yet unafraid to speak boldly, this book provides a welcome moment of clarity amid the cacophony of climate change literature.

Naomi Oreskes is professor of the history of science and affiliated professor of Earth and planetary sciences at Harvard University. Her 2004 essay "The Scientific Consensus on Climate Change," cited by Al Gore in An Inconvenient Truth (2006), led to op-ed pieces in the Washington Post, the Los Angeles Times, and the San Francisco Chronicle, and to Congressional testimony in the U.S. Senate Committee on Environment and Public Works. With Erik Conway, she is the author of Merchants of Doubt: How a Handful of Scientists Obscured the Truth on Issues from Tobacco Smoke to Global Warming. Erik M. Conway is a historian of science and technology employed by the California Institute of Technology. He recently received a NASA History award for "path-breaking contributions to space history, ranging from aeronautics to Earth and space sciences," and an AIAA History Manuscript Award for his fourth book, Atmospheric Science at NASA: A History.
Loading...
or support indie stores by buying on