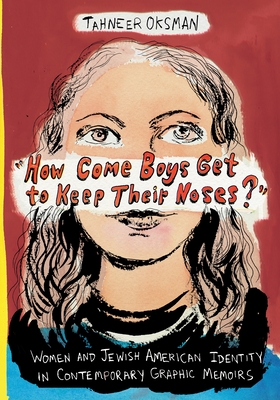 "How Come Boys Get to Keep Their Noses?"

American comics reflect the distinct sensibilities and experiences of the Jewish American men who played an outsized role in creating them, but what about the contributions of Jewish women? Focusing on the visionary work of seven contemporary female Jewish cartoonists, Tahneer Oksman draws a remarkable connection between innovations in modes of graphic storytelling and the unstable, contradictory, and ambiguous figurations of the Jewish self in the postmodern era. Oksman isolates the dynamic Jewishness that connects each frame in the autobiographical comics of Aline Kominsky Crumb, Vanessa Davis, Miss Lasko-Gross, Lauren Weinstein, Sarah Glidden, Miriam Libicki, and Liana Finck. Rooted in a conception of identity based as much on rebellion as identification and belonging, these artists' representations of Jewishness take shape in the spaces between how we see ourselves and how others see us. They experiment with different representations and affiliations without forgetting that identity ties the self to others. Stemming from Kominsky Crumb's iconic 1989 comic "Nose Job," in which her alter ego refuses to assimilate through cosmetic surgery, Oksman's study is an arresting exploration of invention in the face of the pressure to disappear.

Tahneer Oksman is assistant professor and director of the Writing Program at Marymount Manhattan College. She has published articles in a/b: Auto/Biography Studies, Studies in Comics, and Studies in American Jewish Literature, as well as the Forward, the Los Angeles Review of Books, and Cleaver Magazine, where she is the graphic narratives reviews editor.
Loading...
or support indie stores by buying on