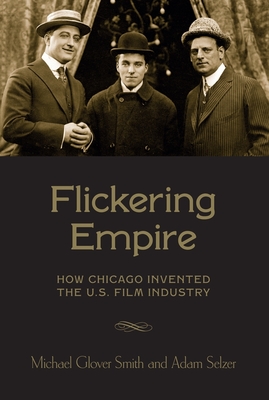 Flickering Empire tells the fascinating yet little-known story of how Chicago served as the unlikely capital of American film production in the years before the rise of Hollywood (1907-1913). As entertaining as it is informative, Flickering Empire straddles the worlds of academic and popular nonfiction in its vivid illustration of the rise and fall of the major Chicago movie studios in the mid-silent era (principally Essanay and Selig Polyscope). Colorful, larger-than-life historical figures, including Thomas Edison, Charlie Chaplin, Oscar Micheaux, and Orson Welles, are major players in the narrative--in addition to important though forgotten industry titans, such as "Colonel" William Selig, George Spoor, and Gilbert "Broncho Billy" Anderson.

Michael Glover Smith is an independent filmmaker whose most recent films, At Last, Okemah! (2009) and The Catastrophe (2011), have won multiple awards at film festivals across the United States. He has taught film history and aesthetics at Oakton Community College, Triton College, Harold Washington College, and the College of Lake County, and lectures at Northwestern University and Facets Multimedia. Adam Selzer lives in Chicago and is a tour guide and the author of several books on history and folklore, including The Smart Aleck's Guide to American History.
or support indie stores by buying on
Copyright © 2020 American Booksellers Association