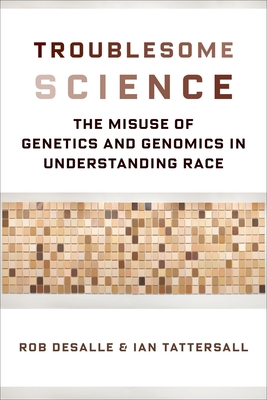 The Misuse of Genetics and Genomics in Understanding Race

It is well established that all human beings today, wherever they live, belong to one single species. Yet even many people who claim to abhor racism take for granted that human "races" have a biological reality. In Troublesome Science, Rob DeSalle and Ian Tattersall provide a lucid and forceful critique of how scientific tools have been misused to uphold racial categorizations. DeSalle and Tattersall argue that taxonomy, the scientific classification of organisms, provides an antidote to the myth of race's biological basis. They explain how taxonomists do their job--how to identify a species and to understand the relationships among different species and the variants within them. DeSalle and Tattersall also detail the use of genetic data to trace human origins and look at how scientists have attempted to recognize discrete populations within Homo sapiens. Troublesome Science demonstrates conclusively that these techniques, when applied correctly to the study of human variety, fail to find genuine differences. While the diversity that exists within our species is a real phenomenon, it nevertheless defeats any systematic attempt to recognize discrete units within it. The stark lines that humans insist on drawing between their own groups and others are nothing but a mixture of imagination and ideology. Troublesome Science is an important call for researchers, journalists, and citizens to cast aside the belief that race has a biological meaning, for the sake of social justice and sound science alike.

Rob DeSalle is a curator in the Sackler Institute for Comparative Genomics and professor at the Richard Gilder Graduate School at the American Museum of Natural History. He is the author of The Science of Jurassic Park and the Lost World: Or How to Build a Dinosaur (with David Lindley, 1997) and the coauthor of Welcome to the Microbiome: Getting to Know the Trillions of Bacteria and Other Microbes In, On, and Around You (2015), among others. Ian Tattersall is curator emeritus in the Division of Anthropology at the American Museum of Natural History. His many books include Masters of the Planet: The Search for Our Human Origins (2012) and The Strange Case of the Rickety Cossack and Other Cautionary Tales from Human Evolution (2015). DeSalle and Tattersall's previous books together include Human Origins: What Bones and Genomes Tell Us About Ourselves (2007); Race? Debunking a Scientific Myth (2011); and A Natural History of Wine (2015).
or support indie stores by buying on