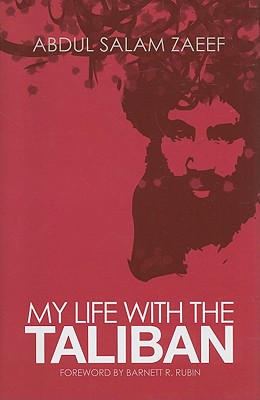 My Life with the Taliban (Hardcover)

"My Life with the Taliban" is the autobiography of Abdul Salam Zaeef, a former senior member of Afghanistan's Taliban and a principal actor in its domestic and foreign affairs. Translated for the first time from the Pashto, Zaeef's words share more than a personal history of an unusual life. They supply a counternarrative to standard accounts of Afghanistan since 1979.

Zaeef shares his experiences as a poor youth in rural Kandahar. Both his parents died when he was young, and Russia's invasion in 1979 forced Zaeef to flee to Pakistan. In 1983, Zaeef joined the jihad against the Soviets, fighting alongside several major figures of the anti-Soviet resistance, including current Taliban leader Mullah Mohammad Omar. After the war, he returned to his quiet life in Helmand, but factional conflicts soon broke out, and Zaeef, disgusted by the ensuing lawlessness, joined with other former mujahidin to form the Taliban, which assumed power in 1994.

Zaeef recounts his time with the organization, first as a civil servant and then as a minister who negotiated with foreign oil companies and Ahmed Shah Massoud, the leader of the Afghani resistance. Zaeef served as ambassador to Pakistan at the time of 9/11, and his testimony sheds light on the "phoney war" that preceeded the U.S.-led intervention. In 2002, Zaeef was delivered to the American forces operating in Pakistan and spent four and a half years in prison, including several years in Guantanamo, before being released without trial or charge. His reflections offer a privileged look at the communities that form the bedrock of the Taliban and the forces that motivate men like Zaeef to fight. They also provide an illuminating perspective on life in Guantanamo.

Abdul Salam Zaeef was born in southern Afghanistan in 1968 and played a role in many of his country's major events. He fought against the Soviets in the 1980s, undertook administrative positions within the Taliban in the 1990s, and became a public critic of the U.S.-backed Karzai government following his release from Guantanamo prison in 2005. He lives in Kabul.Alex Strick van Linschoten and Felix Kuehn are researchers and writers permanently based in Kandahar. They have worked in Afghanistan since 2006, focusing on the Taliban insurgency and the history of southern Afghanistan over the past four decades. Their research extends to other Muslim countries as well, and they are regular contributors on Afghanistan to major western news channels.