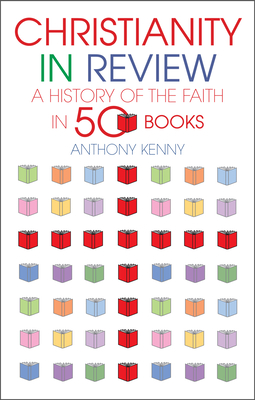 A History of the Faith in 50 Books

Sir Anthony Kenny is one of our most acclaimed living philosophers of religion. Christianity in Review offers his unique perspective on the history of the Church and Christian faith and thought by collecting the 50 most significant and insightful book reviews he has written over the course of more than 50 years for publications such as The Listener, The Tablet and The Times Literary Supplement. Books reviewed include Jaroslav Pelikan’s Jesus through the Ages, Henry Chadwick’s Augustine, Peter Ackroyd’s The Life of Thomas More, Karen Armstrong’s The Battle for God, Alister McGrath’s C. S. Lewis: A Life and The Dawkins Delusion, and the New Jerusalem Bible. The reviews are arranged by historical period and theme, under the headings: The Early Church, The Middle Ages, Renaissance and Reformation, The Nineteenth Century, The Twentieth Century, The Debate between Theists and Naturalists, and Modern Moral Theology. Kenny has written an extended introduction to each section. These, added to the informed personal insight of his reviews, make Christianity in Review a fascinating survey of the Christian faith from a brilliant mind.

Sir Anthony Kenny FBA has been President of the British Academy, President of the Royal Institute of Philosophy and Pro-Vice Chancellor of the University of Oxford. He has written many books on the philosophy of the mind, the philosophy of religion, and the history of philosophy including both scholarly and popular works on Aristotle, Aquinas, Descartes and Wittgenstein. He is one of the few surviving translators of the original Jerusalem Bible.
or support indie stores by buying on