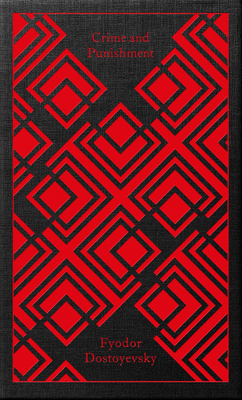 Fyodor Dostoyevsky's seminal classic, now back in a beautiful hardcover edition designed by Coralie Bickford-Smith. Nominated as one of America’s best-loved novels by PBS’s The Great American Read

Raskolnikov, a destitute and desperate former student, wanders through the slums of St Petersburg and commits a random murder without remorse or regret. He imagines himself to be a great man, a Napoleon: acting for a higher purpose beyond conventional moral law. But as he embarks on a dangerous game of cat and mouse with a suspicious police investigator, Raskolnikov is pursued by the growing voice of his conscience and finds the noose of his own guilt tightening around his neck. Only Sonya, a downtrodden prostitute, can offer the chance of redemption.

This vivid translation by David McDuff has been acclaimed as the most accessible version of Dostoyevsky's great novel, rendering its dialogue with a unique force and naturalism. This edition of Crime and Punishment also includes a new chronology of Dostoyevsky's life and work.

Fyodor Dostoyevsky (1821–1881), one of nineteenth-century Russia’s greatest novelists, spent four years in a convict prison in Siberia, after which he was obliged to enlist in the army. In later years his penchant for gambling sent him deeply into debt. Most of his important works were written after 1864, including Notes from Underground, Crime and Punishment, The Idiot, and The Brothers Karamazov, all available from Penguin Classics.

David McDuff was educated at the University of Edinburgh and has translated a number of works for Penguin Classics, including Dostoyevsky’s The Brothers Karamazov.