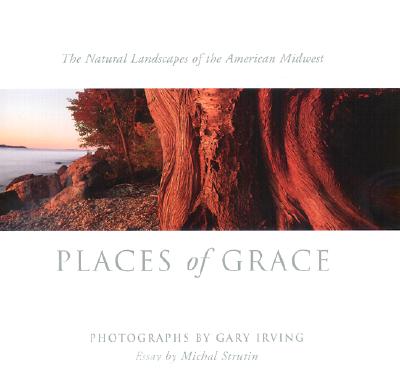 The Natural Landscapes of the American Midwest

This stunning collection of photographs uncovers the mystery and beauty of a part of the country that for most people is hidden in plain view. Places of Grace reveals both the physical splendor and the natural history of a ten-state region encompassing Illinois, Nebraska, Wisconsin, Minnesota, Iowa, Missouri, Kansas, Ohio, Indiana, and Michigan.
The Midwest is full of useful, productive lands, a "breadbasket" ideally suited to raising crops and livestock. There is another Midwest, however, marked by lands that historically have resisted human purposes: the dark swamp forests of the far north, Nebraska's arid Sand Hills, the rockbound Flint Hills of Kansas. Such lands as these, although difficult to cultivate, are valuable in terms not calculable in units produced or metric tons shipped. Many have been preserved as national parks or wildlife refuges. All hold secrets for the careful observer:
"Above a twisted sandstone gorge, golden autumn leaves drift thickly over the floor of an Indiana hardwood forest, their crunch underfoot releasing crisp, earthy odors. A copper and gold tall grass prairie shimmers under the sun from horizon to horizon. In Michigan's Upper Peninsula, the setting sun hovers—red as a bloodorange—just above Lake Superior's cool blue horizon as the laughing cry of a loon rises from behind a screen of balsams. On the vast plains, heat lightning ripples from a central point, netting the sky with white fire. . . . " [from Strutin essay]
Open Places of Grace and be guided through forest, wetlands, and prairie into the heart of the undiscovered Midwest. From the prairie grasses of western Nebraska to the boreal forests of Michigan's upper peninsula, this spectacular volume delights the eye and fires the imagination with unexpected images of lands that yet retain the marks of their primeval origins.
Presenting a counterpoint of vast expanse and luminous detail, Places of Grace celebrates the rich visual texture and fascinating past of the heartland. Gary Irving's extraordinary photographs and Michal Strutin's elegant prose combine to create a penetrating, vivid, and unforgettable sense of place.

Gary Irving, an award-winning photographer of the American landscape, has published many books of photographs, including Beneath an Open Sky and Illinois.Michal Strutin is the author of A Guide to Northern Plains Indians, A Wilderness Like Eden: Discovering Natural Israel, and other books of natural history, cultural history, and travel. They previously collaborated on the Great Lakes volume of Smithsonian Guides to Natural America.