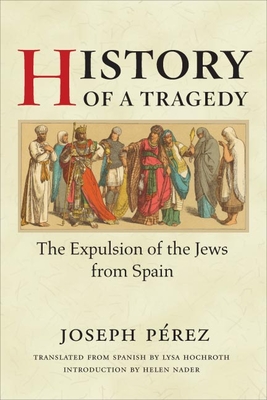 History of a Tragedy

The Expulsion of the Jews from Spain (Hispanisms (University of Illinois))

Few events in the history of Spain have provoked as much controversy as the expulsion of the Jews in 1492. Conflicts within the Catholic Church, suspicions within the newly unified Spain, and the claims of Spanish merchants combined to make the Spain of Ferdinand and Isabella intolerant and inquisitorial. Yet the roots of Spanish anti-Semitism went deeper. In this concise survey of the expulsion of the Sephardic Jews, Joseph Perez studies the evolution of the Jewish community in Spain from the time of the Visigoths to the reign of the Catholic kings. He explores the Jewish community's role in creating and sustaining the vibrant cultural, political, and economic world of medieval Spain, and how growing religious intolerance, a pervasive resentment of the "others," and a string of escalating encroachments culminated in expulsion.


Praise For History of a Tragedy: The Expulsion of the Jews from Spain (Hispanisms (University of Illinois))…

"This is an exemplary work of humane scholarship that informs its readers and illuminates its subject, and is deserving of the highest praise."--International History Review

Joseph Perez is currently the director of the Casa de Velazquez in Madrid. He is the author of La revolution des "Communidades" de Castille, 1520-1521 and other books. Lysa Hochroth is currently an editor with the International Council of Museums in Paris. Her previous translations includealso Enrique Florescano's The Myth of Quetzalcoatl.
Loading...
or
Not Currently Available for Direct Purchase