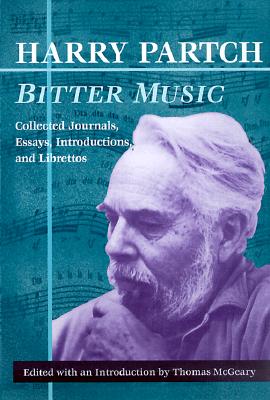 Bitter Music collects writings by one of the twentieth century's great musical iconoclasts. Rejecting the equal temperament and concert traditions that have dominated western music, Harry Partch adopted the pure intervals of just intonation and devised a 43-tone-to-the-octave scale, which in turn forced him into inventing numerous musical instruments. His compositions realize his ideal of a corporeal music that unites music, dance, and theater.

Winner of the ASCAP-Deems Taylor Award, Bitter Music includes two journals kept by Partch, one while wandering the West Coast during the Depression and the other as he hiked the rugged northern California coastline. It also includes Partch's essays on and discussions of his own compositions, as well as librettos and scenarios for six major narrative/dramatic works.

"Bitter Music [is] a collation of Partch's miscellaneous writings and lectures. . . . [The] book offers occasion for gratitude, for it reminds us that (in the words of Lou Harrison, the Californian composer who has to a degree assumed Partch's mantle): ‘Harry told the truth about tune, as Kinsey did about sex.'"--Wilfred Mellers, Times Literary Supplement

"This splendid collection is a great step forward for Partch."--Peter Dickinson, Musical Times

"It is said that [Partch] is the most innovative, iconoclastic and genuinely American composer of our century and Thomas McGeary, by his excellent editing, has allowed us to understand these statements."--John Beck, Percussive Notes

Harry Partch (1901-1974) was a largely self-taught composer, music theorist, and musical instrument maker. He is a member of the Hall of Fame of the Percussive Arts Society and the author of Genesis of a Music.Thomas McGeary is the compiler of The Music of Harry Partch: A Descriptive Catalog and a contributor to The Blackwell History of Music in Great Britain. He also received an ASCAP-Deems Taylor Award for his translation and edition of Arnold Schoenberg's "Brahms the Progressive" for the Journal of the Arnold Schoenberg Institute.
Loading...
or
Not Currently Available for Direct Purchase