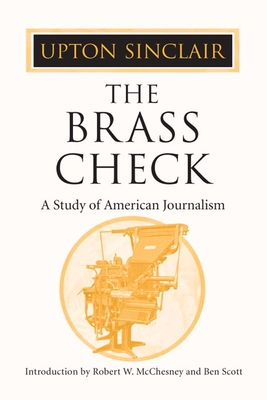 A STUDY OF AMERICAN JOURNALISM

In this systematic critique of the structural basis of U.S. media -- arguably the first one ever published -- Upton Sinclair writes that “American journalism is a class institution serving the rich and spurning the poor.” Likening journalists to prostitutes, the title of the book refers to a chit that was issued to patrons of urban brothels of the era.
Fueled by mounting disdain for newspapers run by business tycoons and conservative editors, Sinclair self-published The Brass Check in the years after The Jungle had made him a household name. Despite Sinclair’s claim that this was his most important book, it was dismissed by critics and shunned by reviewers. Yet it sold over 150,000 copies and enjoyed numerous printings.
A substantial introduction to this paperback edition by Robert W. McChesney and Ben Scott asserts the book’s importance as a cornerstone critique of commercial journalism and a priceless resource for understanding the political turbulence of the Progressive Era.

Upton Sinclair (1878-1968) was a Pulitzer prize-winning novelist and social reformer who exposed the horrors of the Chicago meat-packing industry in The Jungle and fervently advanced his socialist politics in such works as Metropolis, Oil! and Boston.Robert W. McChesney is a professor in the Institute of Communications Research at the University of Illinois at Urbana-Champaign. He is the author of Rich Media, Poor Democracy: Communication Politics in Dubious Times and the coauthor of Our Media, Not Theirs among other books. Ben Scott is a graduate student in communications at the University of Illinois at Urbana-Champaign.