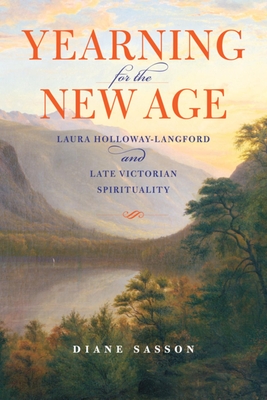 Yearning for the New Age (Hardcover)

This biography of an unconventional woman in late 19th-century America is a study of a search for individual autonomy and spiritual growth. Laura Holloway-Langford, a "rebel girl" from Tennessee, moved to New York City, where she supported her family as a journalist. She soon became famous as the author of Ladies of the White House, which secured her financial independence. Promoted to associate editor of the Brooklyn Daily Eagle, she gave readings and lectures and became involved in progressive women's causes, the temperance movement, and theosophy--even traveling to Europe to meet Madame Blavatsky, the movement's leader, and writing for the theosophist newspaper The Word. In the early 1870s, she began a correspondence with Eldress Anna White of the Mount Lebanon, New York, Shaker community, with whom she shared belief in pacifism, feminism, vegetarianism, and cremation. Attracted by the simplicity of Shaker life, she eventually bought a farm from the Canaan Shakers, where she lived and continued to write until her death in 1930. In tracing the life of this spiritual seeker, Diane Sasson underscores the significant role played by cultural mediators like Holloway-Langford in bringing new religious ideas to the American public and contributing to a growing interest in eastern religions and alternative approaches to health and spirituality that would alter the cultural landscape of the nation.

Diane Sasson received her doctorate from the University of North Carolina at Chapel Hill. She is the author of The Shaker Spiritual Narrative (1983) and articles on American folklore and communal societies. She was Director of the Master of Arts in Liberal Studies Program at Duke University, and served as President of the National Association of Graduate Liberal Studies. For the last decade, she has been on the faculty at Vanderbilt University.
or support indie stores by buying on
Copyright © 2020 American Booksellers Association