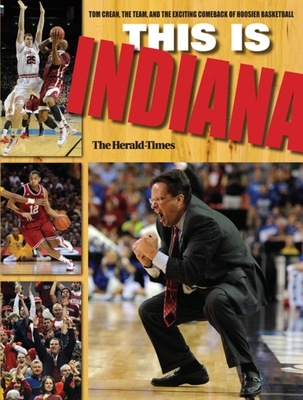 This Is Indiana (Paperback)

Tom Crean, the Team, and the Exciting Comeback of Hoosier Basketball

On a chilly Saturday in December 2011, Tom Crean led his Hoosier basketball players to an upset win over Kentucky, the #1-ranked basketball team in the nation. From that moment on, the revival of IU basketball was becoming a reality. Back in 2008, facing many challenges, Coach Tom Crean walked into Indiana's Assembly Hall, promising a return to glory for Indiana basketball. Four years later, led by Big Ten Freshman of the Year Cody Zeller and the brilliant lineup of Jordan Hulls, Christian Watford, Will Sheehey, Verdell Jones III, and Victor Oladipo, the Hoosiers went 24-7. Making it to the NCAA's Sweet Sixteen, the team once again faced the Wildcats in what would prove to be a thrilling season finale. A keepsake for Hoosiers and basketball lovers everywhere, This Is INDIANA will let you relive this incredible season--game by game, photo by photo.

The Herald-Times, a daily newspaper serving Bloomington, Indiana, and surrounding areas, is a three-time winner of the Blue Ribbon award as the best daily newspaper in the state of Indiana.
or
Buy Here
Copyright © 2020 American Booksellers Association