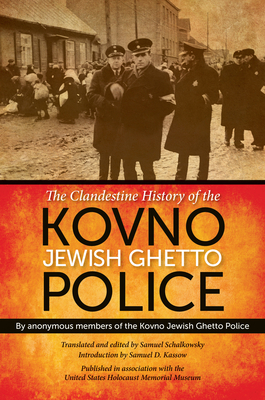 The Clandestine History of the Kovno Jewish Ghetto Police

As a force that had to serve two masters, both the Jewish population of the Kovno ghetto in Lithuania and its German occupiers, the Kovno Jewish ghetto police walked a fine line between helping Jews survive and meeting Nazi orders. In 1942 and 1943 some of its members secretly composed this history and buried it in tin boxes. The book offers a rare glimpse into the complex situation faced by the ghetto leadership and the Jewish policemen, caught between carrying out the demands of the Germans and mollifying the anger and frustration of their own people. It details the creation and organization of the ghetto, the violent German attacks on the population in the summer of 1941, the periodic selections of Jews to be deported and killed, the labor required of the surviving Jewish population, and the efforts of the police to provide a semblance of stability. The secret history tells a dramatic and complicated story, defending the actions of the police force on one page and berating its leadership on the next. A substantial introduction by distinguished historian Samuel D. Kassow places this powerful work within the context of the history of the Kovno Jewish community and its experience and fate at the hands of the Nazis.

The anonymous policemen who composed this secret history were members of a Jewish police force that served in the Kovno ghetto from August 1941 until the Nazis murdered the leadership of the force in March 1944.Samuel Schalkowsky, a survivor of the Kovno ghetto, is a volunteer at the United States Holocaust Memorial Museum.Samuel D. Kassow is Charles H. Northam Professor of History at Trinity College and author of Who Will Write Our History? Emanuel Ringelblum, the Warsaw Ghetto, and the Oyneg Shabes Archive (IUP, 2007).
Loading...
or support indie stores by buying on