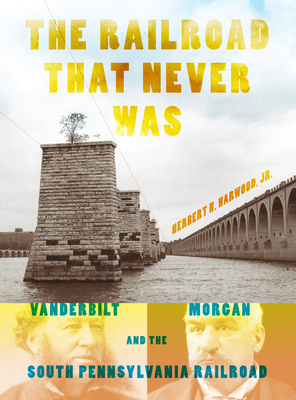 The Railroad That Never Was (Paperback)

Vanderbilt, Morgan, and the South Pennsylvania Railroad (Railroads Past and Present)

This 200-mile line through Pennsylvania's most challenging mountain terrain was intended to form the heart of a new trunk line from the East Coast to Pittsburgh and the Midwest. Conceived in 1881 by William H. Vanderbilt, Andrew Carnegie, and a group of Pittsburgh and Philadelphia industrialists, the South Pennsylvania Railroad was intended to break the Pennsylvania Railroad's near-monopoly in the region. The line was within a year of opening when J. P. Morgan brokered a peace treaty that aborted the project and helped bolster his position in the world of finance. The railroad right of way and its tunnels sat idle for 60 years before coming to life in the late 1930s as the original section of the Pennsylvania Turnpike. Based on original letters, documents, diaries, and newspaper reports, The Railroad That Never Was uncovers the truth behind this mysterious railway.