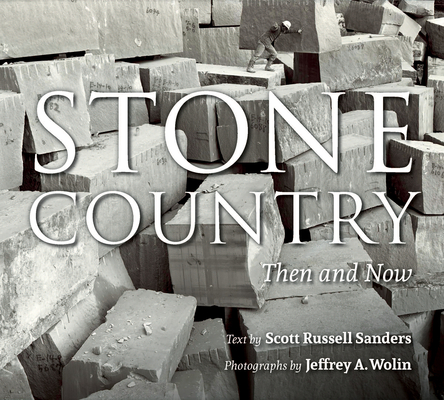 Quarrying, cutting, and carving limestone has provided work for thousands of people in Indiana for nearly two centuries. Along highways and backroads, the brawny machinery these workers use to finesse the stone, the humpbacked mills where they shape it, and the rails and roads where they ship it dot the landscape. In this new edition of Stone Country, Scott Russell Sanders and Jeffrey A. Wolin talk with the stone workers, explore the quarries and mills, and trample along creeks and railroad spurs uncovering the history of the industry and the people who built it. These new stories and photographs are a biography, not of a person--although it is filled with many portraits of individuals--but of a place. It is an up-close look at a singular point on the planet where the miracles of geology have yielded a special kind of stone, and where landscape, towns, and the people themselves bear its mark.

Scott Russell Sanders is the author of twenty books of fiction and nonfiction, including Hunting for Hope, Earth Works (IUP, 2012), Dancing in Dreamtime (IUP, 2016), and Divine Animal. Among his honors are the Lannan Literary Award, the John Burroughs Essay Award, the Mark Twain Award, the Cecil Woods Award for Nonfiction, and fellowships from the Guggenheim Foundation and the National Endowment for the Arts.Jeffrey A. Wolin is Ruth N. Halls Professor of Photography at Indiana University. He is the author of Written in Memory: Portraits of the Holocaust and his photographs are in the permanent collections of numerous museums including the Metropolitan Museum of Art, New York; Los Angeles County Museum of Art; and San Francisco Museum of Modern Art. Wolin is the recipient of two fellowships from the National Endowment for the Arts and a Guggenheim Fellowship.
or
Buy Here
Copyright © 2020 American Booksellers Association