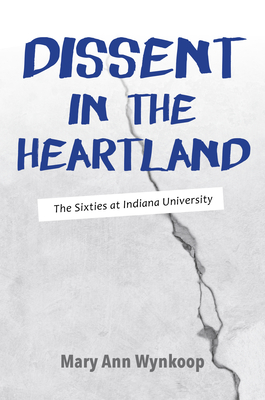 Dissent in the Heartland (Paperback)

The Sixties at Indiana University

During the 1960s in the heartlands of America--a region of farmland, conservative politics, and traditional family values--students at Indiana University were transformed by their realization that the personal was the political. Taking to the streets, they made their voices heard on issues from local matters, such as dorm curfews and self-governance, to national issues of racism, sexism, and the Vietnam War. In this grassroots view of student activism, Mary Ann Wynkoop documents how students became antiwar protestors, civil rights activists, members of the counterculture, and feminists who shaped a protest movement that changed the heart of Middle America and redefined higher education, politics, and cultural values. Based on research in primary sources, interviews, and FBI files, Dissent in the Heartland reveals the Midwestern pulse of the 1960s beating firmly, far from the elite schools and urban centers of the East and West. This revised edition includes a new introduction and epilogue that document how deeply students were transformed by their time at IU, evidenced by their continued activism and deep impact on the political, civil, and social landscapes of their communities and country.

Mary Ann Wynkoop retired as Director of the American Studies Program at the University of Missouri-Kansas City. Since then, she has consulted on projects for Kansas City Public Television, the Henry W. Bloch Foundation, and the National Endowment for the Humanities.
or support indie stores by buying on
Copyright © 2020 American Booksellers Association