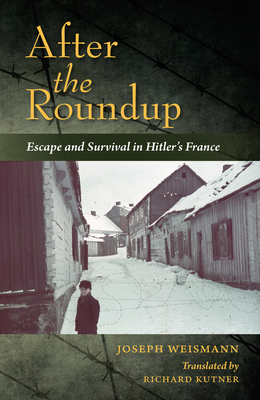 Escape and Survival in Hitler's France

On the nights of July 16 and 17, 1942, French police rounded up eleven-year-old Joseph Weismann, his family, and 13,000 other Jews. After being held for five days in appalling conditions in the V lodrome d'Hiver stadium, Joseph and his family were transported by cattle car to the Beaune-la-Rolande internment camp and brutally separated: all the adults and most of the children were transported on to Auschwitz and certain death, but 1,000 children were left behind to wait for a later train. The French guards told the children left behind that they would soon be reunited with their parents, but Joseph and his new friend, Joe Kogan, chose to risk everything in a daring escape attempt. After eluding the guards and crawling under razor-sharp barbed wire, Joseph found freedom. But how would he survive the rest of the war in Nazi-occupied France and build a life for himself? His problems had just begun.

Until he was 80, Joseph Weismann kept his story to himself, giving only the slightest hints of it to his wife and three children. Simone Veil, lawyer, politician, President of the European Parliament, and member of the Constitutional Council of France--herself a survivor of Auschwitz--urged him to tell his story. In the original French version of this book and in Roselyne Bosch's 2010 film La Rafle, Joseph shares his compelling and terrifying story of the Roundup of the V l' d'Hiv and his escape. Now, for the first time in English, Joseph tells the rest of his dramatic story in After the Roundup.