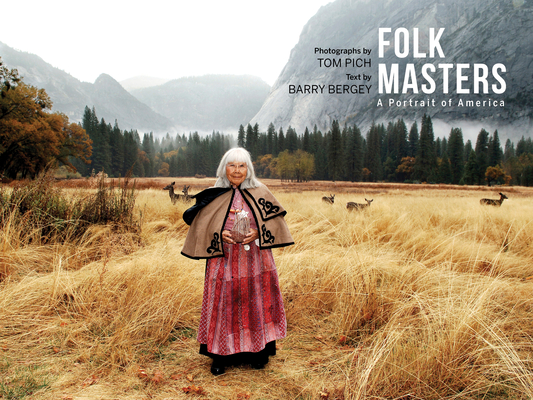 A Portrait of America

Discover one hundred of the greatest folk artists practicing in the United States in Folk Masters: A Portrait of America. Over the past 25 years, photographer Tom Pich has traveled the country to the homes and studios of recipients of the National Endowment for the Arts' National Heritage Fellowship, the highest honor given to folk and traditional artists in the US. His portraits give us a glimpse into their art, their process, and their culture. While each image tells a story on its own, Barry Bergey, former Director of Folk and Traditional Arts at the National Endowment for the Arts, provides further insight into the lives of each featured artist as well as the remarkable stories behind each photograph. Folk Masters honors again the extraordinary women and men who simultaneously take the traditional arts to new heights while ensuring their continuation from generation to generation.

Tom Pich is a professional photographer who has traveled across America for the past 25 years photographing the extraordinary recipients of the National Heritage Fellowships. His portraits have been exhibited at Lincoln Center, the Kennedy Center for the Performing Arts, the National Museum of the American Indian, The Russell Office Building of the U.S. Senate and Library of Congress.Barry Bergey was the Director of Folk and Traditional Arts at the National Endowment for the Arts, recently retiring after a career of nearly 30 years at the agency. His involvement in international arts policy includes consultation with UNESCO, the Organization of American States, the World Bank, the U.S. Information Agency, and the Department of State.
or support indie stores by buying on
Copyright © 2020 American Booksellers Association